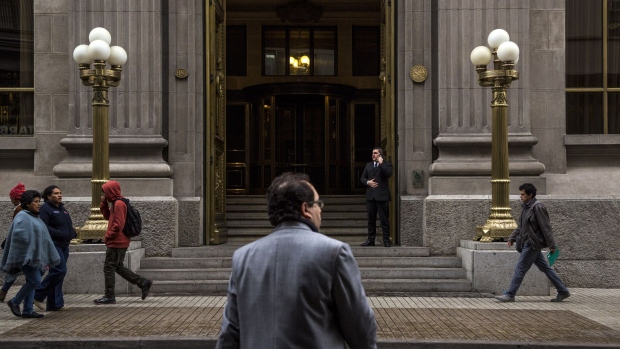 Pedestrians pass in front of the Central Bank of Chile in downtown Santiago, Chile, on Thursday, June 28, 2018. Chile's government has a tough task -- passing a tax reform that is fiscally neutral, popular with the business community and acceptable to an opposition that pushed through corporate tax increases just four years ago. Photographer: Cristobal Olivares/Bloomberg , Bloomberg

(Bloomberg) -- Chile’s Senate Constitution Committee approved a proposal for a fourth round of early pension withdrawals that would pump as much as $20 billion into one of the world’s fastest-growing economies.

The committee voted 3 to 2 in favor of legislation on Tuesday despite growing opposition to the measure. The bill now moves to the Senate floor, where it faces difficult odds of passing.

Three prior rounds of withdrawals have injected some $49 billion into the economy, buoying consumption and inflation amid the coronavirus outbreak. Still, investors are warning more drawdowns would raise financial system risks. This week, some opposition senators said they won’t back the bill.

Finance minister Rodrigo Cerda trusts more opposition senators will also oppose the bill, considering its potential negative impact. “We are talking about higher interest rates and inflation, but also weaker pensions, which is another problem we will need to solve,” Cerda told Emol TV.

Meanwhile, proponents of the withdrawals say that they are a needed to get cash to families that are still reeling from the pandemic.

More broadly, Chile’s AFPs represent a source of social discontent, as payouts for many retirees remain below the poverty line. The main leftist candidates for next month’s presidential election, including Gabriel Boric and Yasna Provoste, have pledged to end the private system.