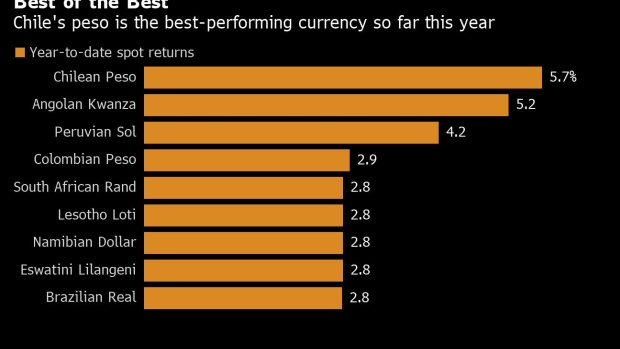 (Bloomberg) -- Chile is becoming a darling of emerging-market investors as the central bank’s hawkish pivot added to a string of positive developments that have been buoying some the nation’s assets.

The outlook for the peso -- already the world’s best-performing currency this year -- got a boost from the larger-than-expected rate hike announced Wednesday, which pushed swap rates higher and improved returns for carry traders. At the same time, the sale of $4 billion in sustainable sovereign dollar bonds was well received by markets, and stocks closed at their highest in about a week.

It’s a sign that things may be looking up for the South American country after the election of leftist Gabriel Boric last year triggered a selloff. He has since adopted a more moderate stance, picking a well-known central banker to lead the finance ministry and opposing further pension withdrawals.

“The story in Chile just continues to look better and better after being so negative before the elections,” said Brad Bechtel, a strategist at Jefferies LLC in New York. “Boric’s move back to the center is helping as the BCCh keeps up the hiking pressure.”

The shift in sentiment comes after a period of uncertainty in Chilean markets spurred by fears that Boric would expand the debt burden as his leftist coalition looks to push through ambitious campaign pledges to improve public services and reduce inequality.

On top of easing political headwinds, the nation’s central bank surprised markets by delivering its largest interest rate hike since 2001, laying the groundwork for even more tightening ahead. Bloomberg Economics economist Felipe Hernandez said he still expects the hiking cycle to end with rates at 7% next quarter, prospects have risen for even more hikes.

The peso initially rallied on Thursday morning, though it was eventually pressured lower by a stronger U.S. dollar following hawkish tones from the Federal Reserve Wednesday. Still, both the rate hike and Boric’s move toward the center have helped Wells Fargo strategist Brendan McKenna to turn more optimistic on the currency.

“The carry appeal of the currency certainly helps, but the political risk has weighed on the peso the most over the last 12 months,” he said. “If the political risk continues to ease, the peso should be one the emerging-market currencies that outperforms.”

In the longer term, challenges are still around. Credit Agricole’s head of emerging market strategy and research Sebastien Barbe says uncertainty lingers around the process Chile is undergoing to rewrite its constitution, and the country’s widening current account outweighs the support of tighter monetary policy. He sees the peso ending the year at 830 per dollar, less than 3% weaker than current levels.

Still, bond investors are seizing the break in political headwinds and welcomed the nation’s new dollar notes. The government was able to sell the bonds with smaller spreads than initially planned, though they were still higher than in the last issuance in September.

“We have become more positive on this string of announcements,” said Michael Reynal, a portfolio manager at RS Investment Management in Des Moines, Iowa, pointing to Marcel’s appointment as a “strong signal to the market that Chile would not abandon the achievements it has made in a market-driven economy.”