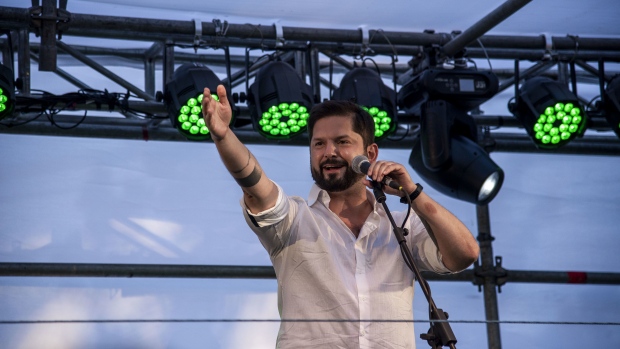 Gabriel Boric, presidential candidate for the Social Convergence party, speaks during a campaign rally ahead of the general election in Casablanca, Chile, on Thursday, Nov. 18, 2021. Chileans go to the polls this weekend in what may be the most divisive election since the transition to democracy three decades ago. , Bloomberg

(Bloomberg) -- Chile’s leftist presidential candidate Gabriel Boric pledged fiscal responsibility as he seeks to win over centrist voters that will be key in the country’s Dec. 19 runoff.

Efficient public spending represents one of the main points to an addendum of plans that will be unveiled today, Boric said at a campaign event on Wednesday. If elected, Boric said he will stabilize debt levels as a percentage of gross domestic product by the end of his term.

“We know that we will take over an economy that’s probably overheated, with inflationary pressures that we’ve seen,” Boric said. “What we are going to do -- and what we are committed to -- is a clear trajectory of fiscal consolidation.”

Boric and his conservative rival, Republican Party founder Jose Antonio Kast, are adjusting their proposals to woo centrist and undecided voters ahead of the runoff. On Tuesday, Kast shifted his tone on environmental issues and womens’ rights, while also pledging gradual tax cuts. At stake is the future of Chile’s economic model, which has led to decades of growth but also left many behind.

How Chile’s Presidential Runoff Adds to Change in Air: QuickTake

Including women and young people in the labor force will represent a top priority, Boric said. Changes such as minimum wage increases and reduction in working-week hours will be done gradually, he said, adding that small companies won’t pay more taxes.

Boric said the addendum will have revised plans for boosting tax income in coming years, a central part of his pledge to improve public services.

Chile’s economy is expected to grow about 11% in 2021, fueled by emergency spending and early pension withdrawals. Some private sector analysts say the combination of political uncertainty, higher interest rates and reduced stimulus will lead to a recession later next year.

“We know that 2022 will be an economically complex year,” Boric said. “We are preparing ourselves in the best way possible for this outlook.”