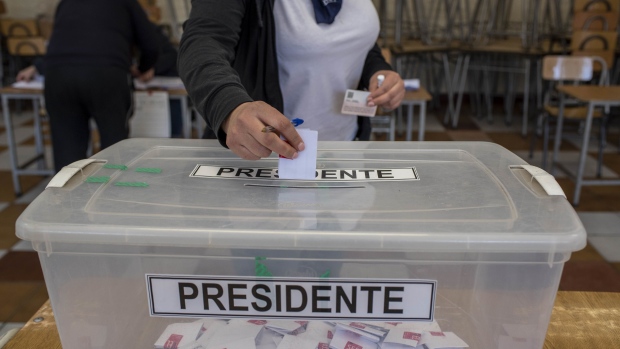 A voter casts a ballot at a polling station during primary presidential elections in Santiago, Chile, on Sunday, July 18, 2021. Chileans went to the polls Sunday in a primary election that will narrow a crowded field of candidates competing for the presidency amid a backdrop of lingering social unrest. , Bloomberg

(Bloomberg) -- The founder of a now defunct financial advisory firm that roiled Chile’s capital markets and a leader of a Stalinist offshoot of Chile’s communist party will be in the final list of nine candidates vying in the country’s presidential elections November.

Seven contenders registered with government electoral body Servel before the final cutoff on Monday night. One of those was Senate President Yasna Provoste, who won last week’s primary between traditional center-left parties.

The candidates will also face Sebastian Sichel and Gabriel Boric, both of whom won their respective primaries in July. The first round of presidential elections will take place on Nov. 21, with a possible runoff set for December.