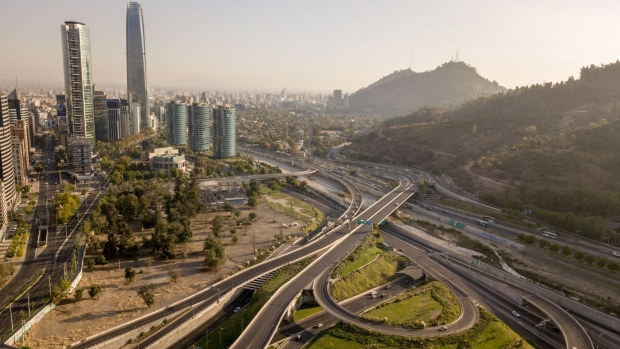 The financial district and Costanera Norte highway during lockdown in Santiago, Chile, on Monday, March 29, 2021. Chile has been vaccinating its population much faster than all other countries in Latin America, with more than 6 million inoculated, though the nation has still seen its daily record number of cases increase. Photographer: Cristobal Olivares/Bloomberg , Bloomberg

(Bloomberg) -- Propelled by a fast vaccine roll-out and higher copper prices, Chilean equities have outperformed since November all other major American indexes both in local currency and when measured in dollars.

Many foreign investors have been encouraged by the vaccines, and, while local market strategists recognize the advances in inoculations, they are adopting a more neutral stance on the equity market as political uncertainty lingers on the horizon.

This is the view of the participants of the first “Chile Market Chat” organized by Bloomberg News. The guests were:

The consensus is that the vaccination roll-out has supported local equities this year. “Once the massive vaccination process gained speed, the whole world turned to the local market,” Munoz said.

In Chile, the stock market hit bottom in October after the plebiscite over a new constitution, and since then investors have plowed money into local and global equities. The S&P IPSA benchmark index has gained 38% in pesos from its 52-week low reached Nov. 3. In dollars, that gain is 46%.

Some opportunities still remain in over-punished local stocks such as banks, while infrastructure projects will benefit industrial sectors, Munoz said. New lockdowns “may hit local assets in the short run, but they should return to their longer-term positive trend,” Munoz said.

The pandemic has also increased the attractiveness of alternative assets such as real estate and private credit, especially considering the low returns of the fixed income market, Osorio said.

When it comes to parking money abroad, the strategists favored U.S. stocks over Europe, given this region’s messy vaccination process and slow economic recovery, although there could be a recovery in the second half of the year.

The guests also agreed that the election of a Constitutional Assembly and the writing of a new constitution should command more attention from investors in upcoming months. “Unfortunately, there are additional factors besides the vaccination that will have an effect on the market, particularly the political discussion, which for now has been in the background,” Osorio said.

Uncertainty regarding the contents of a new constitution and a loss of momentum for the S&P IPSA equity benchmark weighed on Osorio’s decision to turn more neutral on stocks. Kaempfe also turned neutral on the stock market as soon as he heard of a new round of lockdowns.

In local fixed income, the guests agreed that higher-rated corporate bonds with shorter maturities were more attractive, with the exception of expensive local bank bonds. Longer bonds, with maturities of more than 10 years, have been punished due to uncertainty about a new round of retirement savings withdrawals, which keeps pension funds and insurance companies -the natural buyers of these notes- away from the market, Kaempfe said.

“Chile’s nominal and CPI-linked curves provide zero value under 10-year duration,” Kaempfe said. There could be opportunity above that maturity, considering the strong surge of the longer end.

A consensus was less visible when it came to Brazil, Latin America’s largest economy, with Osorio and Munoz not sure if the country has a clear way out of its current pandemic mess.

“We are very much convinced that by year-end the world will have of Brazil the same perception it holds today of Chile,” Kaempfe said. Vaccination will gain speed later in 2021, and while Chile’s market has already priced in a rapid local inoculation, Brazil assets haven’t yet. “Brazil is over-punished,” he said.

President Jair Bolsonaro has no control over the pandemic and Brazil’s situation doesn’t seem like a coincidence, according to Osorio. “The country can be a breeding ground for new virus strains and could even generate some sort of black swan in the future,” he said.