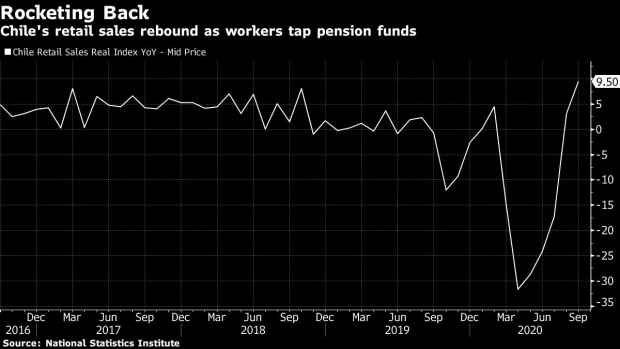 Sebastian Pinera, Chile's president, wears a protective mask while speaking to members of the media at a polling station during the national referendum in Santiago, Chile, on Sunday, Oct. 25 2020. Caught between their status as Latin America’s economic standout and growing internal outrage over inequality, Chileans start a far-reaching process of self-definition on Sunday as they choose whether and how to draft a new constitution. , Bloomberg

The senate on Thursday backed the proposal designed to boost household finances during the pandemic with 35 votes in favor and one against, after a similar measure passed earlier this year. They rejected the rival, opposition-sponsored bill that President Sebastian Pinera pledged to take to the constitutional court.

Pinera and opposition lawmakers are dueling over Chile’s privately-managed pension funds after they became one of the targets of months of social protests. Earlier this year, congress defied government pressure by passing legislation that sparked $17 billion in retirement withdrawals. When lawmakers later introduced another bill along the same lines, the president struck back by challenging it in the constitutional court, while reluctantly presenting his own proposal.

The government’s bill seeks to reclaim the president’s attributions for approving withdrawals through institutional channels, finance minister, Ignacio Briones, said. “Powers of the State must have limits, that’s what is at stake here,” he said, referring to the decision to challenge the opposition’s bill in court.

The legislation, which caps withdrawals at 150 UF ($5,678) and will subject some of them to taxation, now moves on to the lower house for fresh debate and votes.

According to the text, Chile’s pension funds, known locally as AFPs, will have as many as 30 business days to provide the money after a contributor requests the cash. The bill is expected to lead to roughly $15 billion in fresh withdrawals.

The legislation is part of a broader fight for the future of Chile’s pensions, which hold roughly $200 billion in investments. The current system, introduced during the Augusto Pinochet dictatorship, has been targeted by protesters over its low payouts to retirees.

Detractors see the private pension funds as a cause of inequality in an investment grade country able to spend more on its people. People have used the money from the first withdrawals to pay down debt, buy consumer goods such as electronics and even make downpayments for new homes.

On the other hand, investors point out that the AFPs finance crucial investments and infrastructure nationwide. It will be a hot-button topic as the country re-writes its constitution next year.

Amid the virus outbreak, Pinera’s government has pledged emergency aid worth 12% of gross domestic product, with measures including low-interest rate loans and job protection programs. Still, the pension withdrawals stood out for their direct impact, driving stronger-than-expected growth in the third quarter and adding 1.2% to GDP alone this year, according to the central bank.

Chile’s Finance Ministry expects the economy to shrink 5.5% this year before rebounding 5% in 2021.

(Updates with Finance minister quote in 4th paragraph, and details on bill in 5th and 6th paragraph)