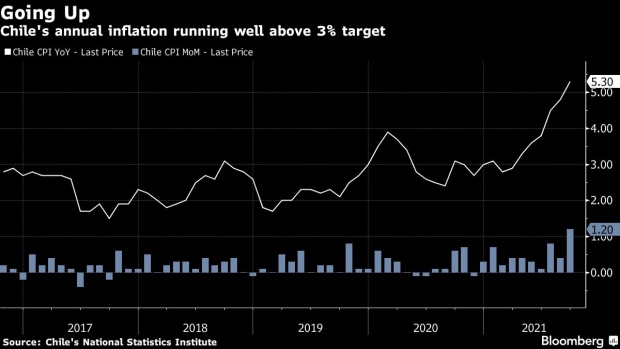 (Bloomberg) -- Chile’s central bank raised its benchmark interest rate by 125 basis points, surprising investors with a larger-than-expected hike for the second straight decision in a rush to tame soaring inflation.

Policy makers led by Mario Marcel lifted the overnight rate to 2.75% on Wednesday. Just one economist in a Bloomberg survey expected a raise of 150 basis points, while eight saw a full percentage point increase and five forecast a second straight hike of 75 basis points.

“The evolution of the macroeconomic scenario has increased the risks regarding the convergence of inflation to the 3% target within the policy horizon,” the bank said in the statement accompanying its decision. “Although core inflation has evolved in line with projections, the outlook for the coming months has been rising, in a context where inflation expectations two years ahead stand above the 3% target.”

The decision sends a powerful message that the bank will do what it takes to haul inflation back to the 3% target. Consumer prices blew past estimates in September, surging by the most since 2008 on a month-on-month basis amid resurgent growth. Gross domestic product will expand as much as 11.5% this year, according to the central bank, and lawmakers are debating new pension withdrawals that would inject another $20 billion into the economy.

“Core inflation has begun its cyclical upward trajectory and could rise to 6% by year-end 2021,” Leonardo Suarez, director of research at LarrainVial SA, wrote in a report this week. “Greater liquidity spurred by pension saving withdrawals and social transfers will continue driving inflation higher.”

At the previous rate-setting meeting in August, the bank board raised borrowing costs by 75 basis points. At that time, most economists were pricing in an increase of either a quarter or a half of a percentage point.

(Updates with quote from Central Bank’s statement in third paragraph.)