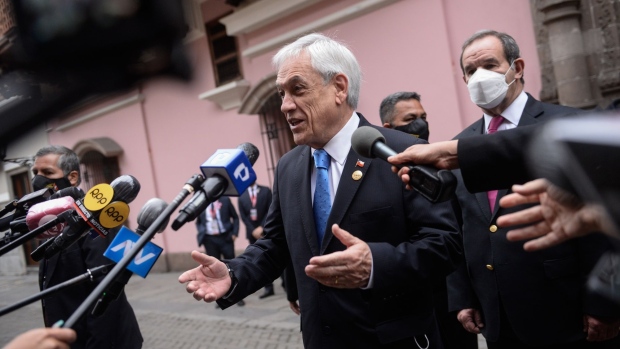 Sebastian Pinera, Chile's president, speaks with members of the media ahead of an inauguration ceremony for Pedro Castillo, Peru's president-elect, at the Ministry of Foreign Affairs in Lima, Peru, on Wednesday, July 28, 2021. Peru's dollar bonds due 2050 dropped after President Pedro Castillo said he would call for a constitutional referendum during his inaugural speech. , Bloomberg

(Bloomberg) -- Chile’s lower house started its voting session on an impeachment motion against President Sebastian Pinera with a marathon speech aimed at giving a key opposition lawmaker time to arrive at congress.

Deputy Jaime Naranjo on Monday morning started reading a 1,300-page document, a task that’s seen taking 13 hours to complete. The plan is to prolong the session so that deputy Giorgio Jackson can complete quarantine after being in contact with a person infected with Covid-19 and then go vote.

Pinera was accused of violating the constitution after the Pandora Papers revealed a potential conflict of interest in his family’s sale of a mining project. While the motion may pass the lower house by a tight margin, it is very unlikely to pass the senate. The president’s term will end next March.

“I can speak for 72 or 92 hours, 5 days,” Naranjo said according to a video on his Twitter account. “If this is about accusing Pinera, I can speak for a month.”

The lower house’s impeachment voting deadline is Monday, but the session can be extended if speeches are ongoing. Jackson, who self-isolated after spending time with Gabriel Boric, will be allowed to enter after midnight tonight.

The Pandora Papers revealed a contract signed in the British Virgin Islands in 2010 regarding the Pinera family’s sale of a stake in a $2.5 billion iron ore project called Dominga. Part of the payment was allegedly conditional on the government not declaring the area a nature reserve.

Pinera was serving his first term as president at the time, and had the last word on any change in status for the zone. He has said that his finances were placed in a blind trust at the start of that term, and that he wasn’t informed of the details of the sale.

The president has also said that a previous investigation into the deal in 2017 didn’t lead to any charges.

The impeachment motion has to be approved by a majority of deputies - translating to 78 votes in total - in order to proceed. Following that, it would need to be backed by two-thirds of the senate.

If the lower house approves the motion, then Pinera would be temporarily suspended from his role until the senate’s final vote.