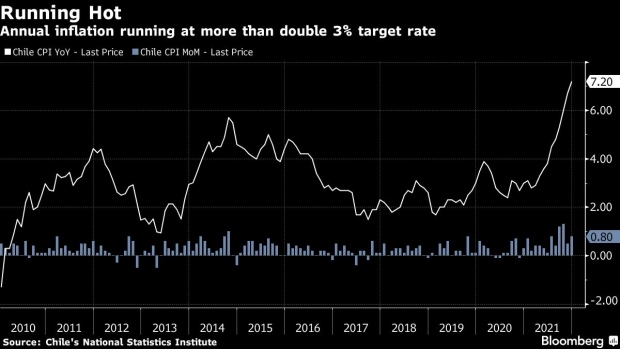 The bank increased the overnight rate by 150 basis points to 5.5% on Wednesday. Eleven analysts in a Bloomberg survey expected a third straight hike of 125 basis points, while only three bet on a rise of 1.5 percentage points.

The central bank warned of significant risks for inflation, according to its statement. “In particular, the recent evolution of activity and inflation is somewhat above what was forecast in the December monetary policy report and inflationary pressures derived from the international scenario have increased,” the bank said.

Policy makers are struggling to contain the fastest annual inflation in 14 years amid record economic growth. Bank board members wrote after their last decision that it was important to not surprise financial markets on rates. Since then, consumer price increases topped forecasts for six consecutive months, global oil prices jumped and the recovery of the local labor market gathered steam.

The economy expanded about 12% in 2021, the fastest pace yet for the South American nation, according to central bank estimates published last month. Growth was powered by temporary stimulus including emergency cash transfers and three rounds of early pension withdrawals totaling nearly $50 billion.

Chile’s economic recovery has also been spurred by its swift vaccination campaign against Covid-19, which has delivered booster shots to about 60% of the population, according to health ministry data.

Those factors, together with global supply shocks and higher commodity costs, catapulted annual inflation to 7.2% in December, well above the 3% target.

Outgoing central bank head Mario Marcel, tapped by President-elect Gabriel Boric as finance minister, did not vote as he focuses on ensuring a smooth transition, leaving the rate decision in the hands of the four remaining board members.

(Updates with quote from statement in third paragraph)