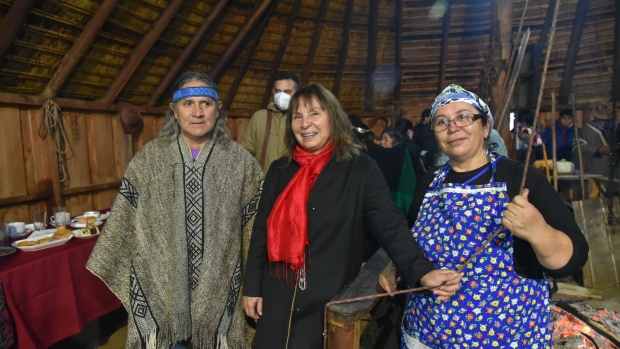 (Bloomberg) -- Chile’s government is pressing on with talks and plans to speed up land restitutions as it pours money into parts of the south scarred by an increasingly violent conflict with indigenous communities, a government official said.

Determining the territory to be handed back is a hard task that requires long negotiations with local Mapuche groups, Social Development Minister Jeanette Vega said in an interview. The aim is to restore calm to a region some 600 kilometers (373 miles) south of Santiago, the country’s capital, that has seen regular attacks and episodes of violence against the local forestry industry.

“A land registry survey won’t be viable because, to define how much to hand back, both parties have to agree,” Vega said in a Zoom interview. Mapuche communities not only have claims over territory with some sort of land title, but also over “ancestral” lands, she said. “How do you define what is ancestral?”

President Gabriel Boric’s left-wing administration is working to reset relations with Mapuche groups that have feuded with governments for decades. To that end, officials are pushing plans for public investments and faster solutions on land claims. Critics say they’ve been slow to address violence that has flared in the zone, marring a visit by Interior Minister Izkia Siches earlier this year.

Boric’s government raised the amount of funds allocated to purchasing and transferring territory to Mapuche communities to 35 billion pesos ($39.2 million) from 15 billion pesos, Vega said. Additionally, the administration will spend more than 400 billion pesos on infrastructure works around those tracts to improve living standards, she said.

Vega, who is in charge of both projects, said officials will meet their spending target. “We want to give the land to communities and not to individuals or families,” said Vega, a doctor and former undersecretary of public health.

Chile’s relations with its native peoples have historically been strained. The Mapuches resisted Spanish conquest in the 16th and 17th centuries, forcing the crown to recognize them as independent.

Late in the 19th century, Chile invaded and annexed their territory. For decades, the Mapuches, who are the country’s largest indigenous group, have put the return of their ancestral lands at the core of their demands for justice.

Since the 1990s, some have resorted to demonstrations and land occupations that have led to clashes with police, shootings and deaths. Fringe groups have resorted to arson attacks on agricultural and forestry infrastructure, farmers, and, more recently, Mapuches seen collaborating with the government.

Former President Sebastian Pinera wanted to tender a contract for a land census that would have determined a definitive number of hectares to be handed back, but that process was blocked.

“The majority of the Mapuche people are peaceful,” she said. “There is a very minor percentage that is violent, and they will face the full extent of the law.”