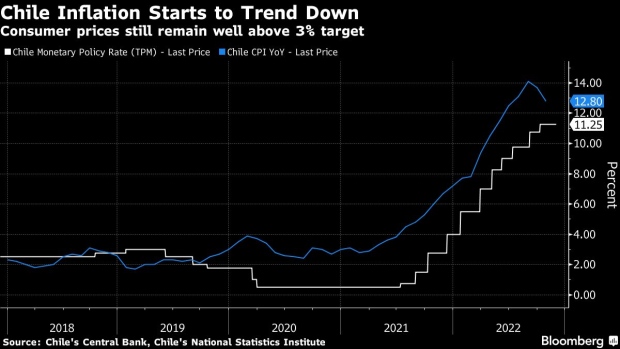 All economists in a Bloomberg survey see the board keeping borrowing costs unchanged at 11.25%, the highest in more than 20 years. The decision would be in line with bank guidance that rates will be held steady following a tightening cycle of 10.75 percentage points since July of last year.

Chile’s central bank, led by its President Rosanna Costa, is striking a cautious tone even after consumer prices came off a three-decade high. Indeed, private-sector analysts expect the annual inflation rate to tick up in a closely-watched report scheduled for Wednesday. On top of that, economic activity has topped market forecasts for the past three months.

“We expect the central bank to hold its benchmark rate at 11.25%. It should reiterate that the tightening cycle is over and monetary policy will remain tight until inflation is on track to return to the target. Inflation is falling but still above target, while activity is slowing but remains above potential.”

The rate-setting meeting comes a day before Brazil likely keeps its borrowing costs unchanged as policy makers in Latin America’s largest economy keep watch over plans for more spending. Peru is expected to hike rates for the 17th straight time the same day after annual inflation sped up further above target.

Chile’s decision will be published on the central bank website at 6 p.m. in Santiago, together with a statement from its board. Here’s what to watch out for:

Economists expect the bank to double down on its view that the timing isn’t right for rate cuts even after annual inflation slowed more than expected for two straight months. Indeed, policymakers will likely push back against bets in the swaps market that borrowing cost cuts should start very early in 2023.

Odds of an up-tick in annual inflation in November “argue for caution against cutting rates too soon after ending the tightening cycle at the October meeting,” according to Win Thin, Global Head of Currency Strategy at Brown Brothers Harriman & Co. “The swaps market is pricing in the start of an easing cycle within the next three months, which seems too soon.”

In her final public remarks before the decision, Costa on Nov. 25 reiterated that borrowing costs will stay at their current level for the time needed to put inflation on track to the 3% target, from the current level of 12.8%.

Investors will scour the statement for remarks on both domestic and international growth trends. Recent signs that top trading partner China may ease Covid-19 restrictions have fueled speculation of greater global demand and higher prices for commodities such as copper, Chile’s main export product.

On the other hand, economists caution that Chile still hasn’t felt the full force of tighter monetary policy.

“It’s probable that the maximum effects of the Chile central bank interest rate hikes to 11.25% will be reflected in the first quarters of next year,” analysts at Bice Inversiones wrote in a note.

Chile’s central bank will publish its detailed growth and inflation forecasts in the quarterly monetary policy report on Wednesday.

--With assistance from Giovanna Serafim and Rafael Gayol.