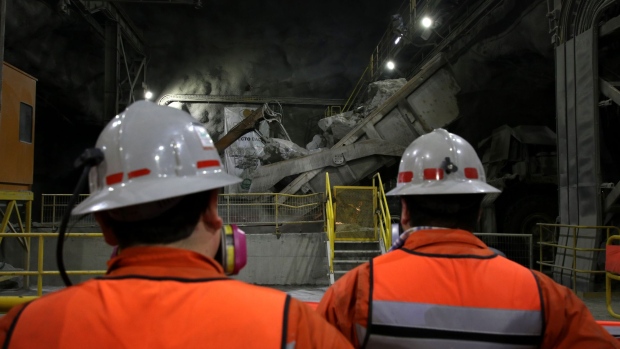 Employees stand inside the Codelco Metals Inc. Teniente copper mine near Rancagua, Chile, on Wednesday, March 21, 2018. Codelco chief executive officer and mining veteran Nelson Pizarro has spent more than half a century working in mines and has dedicated the last four years to turning the world's largest copper producer into a profitable company. , Bloomberg

(Bloomberg) -- Codelco is set to cut shipments of refined copper to China next year after extended outages at its smelters and strong demand elsewhere, according to a person familiar with the matter.

The Chilean mining giant will reduce shipments to customers under annual contracts for 2023 by around 10%, in line with the decline in its refined metal production, said the person, who asked not to be named discussing commercially sensitive information. But while it historically has also sold a significant volume of metal in shorter-term deals, next year Codelco is likely to make fewer “spot” sales to China as copper usage proves resilient in North America and Europe, the person said.

In a written response, the state-owned firm declined to confirm a cut in shipments to China, saying negotiations are ongoing.

Codelco has struggled this year, with copper output dropping 10% between January and September. That’s put the company on course to lose its crown as the world’s top producer.

While the bulk of that decline was caused by setbacks at its mines, extensive repair works at two smelters are also contributing to a sharp drop in its output of refined copper, which has been snapped up by Chinese customers in recent years. Still, some buyers have baulked at Codelco’s latest annual premium of $140 for China.

Codelco’s Ventanas smelter is undergoing a 100-day maintenance, while its Chuquicamata smelter -- which roasts and processes large volumes of high-arsenic concentrate that’s difficult to export -- has extended planned repair works. In October, the company lowered its annual production targets for the second time in three months, partly due to the maintenance program at Chuquicamata.

With contractual negotiations kicking into gear, Codelco’s move to cut sales could cause anxiety among Chinese buyers who’ve been hoping for improvements in supply after bottlenecks in domestic smelting this year. The Chinese refined copper market has been tight in recent months, even with global mine supply increasing and a debt crisis in the property sector weighing on demand.

Codelco’s spot sales to China also look set to decline next year, as Russia’s invasion of Ukraine and subsequent self-sanctioning from manufacturers in Europe creates an opportunity for the company to sell more metal there. European spot premiums rose to their highest in several years, while the US market is expected to remain a strong importer of South American cathode next year.

--With assistance from James Attwood and Mark Burton.