That’s not an easy thing to write given that, on some level, I’m supposed to dissect and study their entrails like tiny birds. Sometimes, though, you just have to put down the wee scalpel and tweezers, wipe off your hands and consider things in their totality.

This tweet, for instance, which landed like a blue-checkmarked hand grenade this week, is perhaps less important for what it might say about the Tesla Inc. CEO’s particular thoughts on cryptocurrency or the environment. It is perhaps more useful when considered as merely one more little uniform tile in the mosaic provisionally titled “Elon Musk just says a lot of stuff on Twitter.”

A quick recap of some recent events:

Off the bat, it looks like the whole liquidity-proof thing is somewhat moot now that Tesla will apparently neither be accepting the stuff nor selling it. Still, with our mosaic in mind, perhaps we might question the veracity of that earlier statement: Who pumps US$1.5 billion into something and then tries to test whether it will trade? Which naturally leads to: Who pumps US$1.5 billion into something with a well-known coal addiction, promotes dubious research about its green credentials, and then realizes it might pose a problem with the ESG crowd? This feels more Ringmaster of Coin than Technoking.

There are other instances of Musk’s tweets occupying an alternate reality or switching realities at bewildering speed. “Funding secured” is the most infamous example, but my colleague Craig Trudell at Bloomberg News rounds up many of the highlights here.

So, yes, it’s possible to pick apart the tweet in any number of ways. Why did Musk do this now? How does it dovetail with his apparent fascination for Dogecoin? Does “will not be selling” mean Tesla already sold a chunk of its stash? Does this have any accounting effect? Might other cryptocurrencies somehow tied to windmills or what-have-you be about to displace Bitcoin? And so on.

Really, though, the best response to all this might be a piece that merely repeats the phrase “Why not just build cars?” in the style of that manuscript by Jack Nicholson’s character in “The Shining.”

Personally, I view the Bitcoin thing primarily as just a sub-plot of Tesla’s bigger, long-running governance drama (premise: one main character, a few rotating bit parts, no script). I also think the company will be tempted to sell Bitcoin as it sees fit to top up earnings, provided the price stays up, and some justification will be found if necessary.

Tesla was sitting on a net paper gain — is paper the right word for this? — of almost US$1 billion at the end of March. This quarter’s earnings already may face pressure from a slower-than-expected rebound in production of more expensive Models S and X and rising prices for just about everything that goes into building an electric vehicle. Then there are the recent problems in China, which may be affecting sales in Tesla’s main growth market. And while Tesla still trades at 163 times forward earnings, it has lost almost US$300 billion  — or a Toyota Motor Corp. and change — since its January peak. 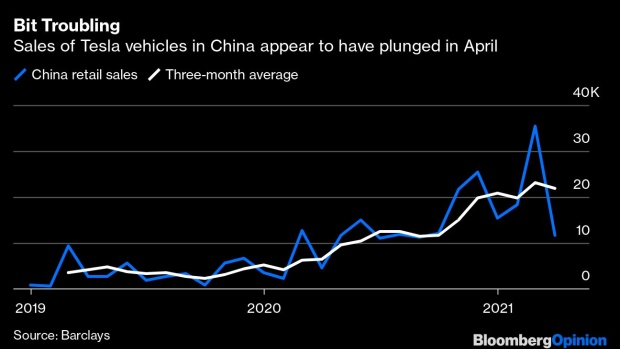 Beyond whatever happens this quarter, the underlying premise of Bitcoin being a cash equivalent itself looks bogus. After all, if this is a currency, then it’s a little odd to keep hearing about its “market cap.”

See? Even now I couldn’t help myself. But really, just try not to think about it too much.