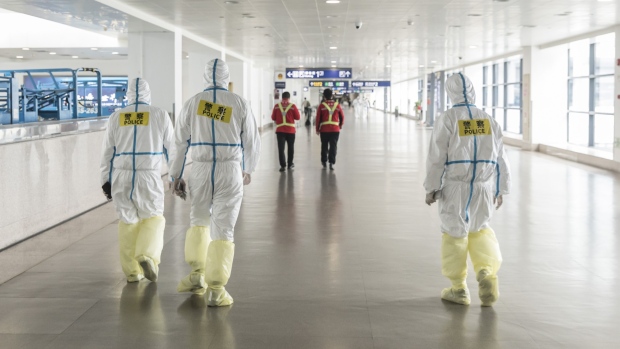 China rejected the American intelligence community’s conclusion that Beijing concealed the extent of the coronavirus epidemic, and accused the U.S. of seeking to shift the blame for its own handling of the outbreak.

Foreign Ministry spokeswoman Hua Chunying on Thursday defended as “open and transparent” China’s response to the virus first identified in December in the central Chinese city of Wuhan. She was responding to a Bloomberg News report saying that the U.S. intelligence community had concluded in a classified report to the White House that Beijing under-reported both total cases and deaths from the disease.

“Some U.S. officials just want to shift the blame,” Hua told a regular briefing in Beijing. “Actually we don’t want to fall into an argument with them, but faced with such repeated moral slander by them, I feel compelled to take some time and clarify the truth again.”

Hua questioned the speed of the U.S.’s response to the virus after banning arrivals from China on Feb. 2. “Can anyone tell us what the U.S. has done in the following two months?” she said.

U.S. President Donald Trump said Wednesday that he hadn’t received an intelligence report saying Beijing had concealed the outbreak, but that their statistics appeared low. “Their numbers seem to be a little bit on the light side, and I’m being nice when I say that,” he said at a daily coronavirus briefing at the White House.

Trump added that the U.S. and China were in constant communication and that Beijing would spend US$250 billion to purchase American products. “We’d like to keep it, they’d like to keep it” he said of the U.S.-China trade deal.

Communications staff at the White House and the Chinese embassy in Washington didn’t immediately respond to requests for comment.

“The reality is that we could have been better off if China had been more forthcoming,” Vice President Mike Pence said Wednesday on CNN. “What appears evident now is that long before the world learned in December that China was dealing with this, and maybe as much as a month earlier than that, that the outbreak was real in China.”

While China eventually imposed lockdowns and mass quarantines, and set up fever clinics to slow the virus’s spread, skepticism toward its numbers has lingered. The Chinese government has repeatedly revised its methodology for counting cases and for weeks excluded people without symptoms entirely. Only on Tuesday it added more than 1,500 asymptomatic cases to its total.

Stacks of thousands of urns outside funeral homes in Hubei province have driven public doubt in Beijing’s reporting.

“The claim that the United States has more coronavirus deaths than China is false,” Senator Ben Sasse, a Nebraska Republican, said in a statement after Bloomberg News published its report. “Without commenting on any classified information, this much is painfully obvious: The Chinese Communist Party has lied, is lying, and will continue to lie about coronavirus to protect the regime.”

Republican lawmakers in the U.S. have been particularly harsh about China’s role in the outbreak. Emphasizing Beijing’s responsibility for the pandemic could be politically helpful to Trump, who has sought to shift blame for the U.S. outbreak away from his administration’s delays in achieving widespread testing for the virus and mobilizing greater production of supplies such as face masks and hospital ventilators.

In her remarks Thursday, Hua lashed out at U.S. politicians who keep attacking China.

“We’d like to provide support and help to them as our capacity allows,” Hua said. “However, these comments by those U.S. politicians are just shameless and morally repulsive, and these slanders, smears and blame games cannot make up for the lost time, but will only cost more lost time and lives.”

Deborah Birx, the U.S. State Department immunologist advising the White House on its response to the outbreak, said Tuesday that China’s public reporting influenced assumptions elsewhere in the world about the nature of the virus.

“The medical community made -- interpreted the Chinese data as: This was serious, but smaller than anyone expected,” she said at a news conference on Tuesday. “Because I think probably we were missing a significant amount of the data, now that what we see happened to Italy and see what happened to Spain.”

U.S. Secretary of State Michael Pompeo has publicly urged China and other nations to be transparent about their outbreaks. He has repeatedly accused China of covering up the extent of the problem and being slow to share information, especially in the weeks after the virus first emerged, and blocking offers of help from American experts.

“This data set matters,” he said at a news conference in Washington on Tuesday. The development of medical therapies and public-health measures to combat the virus “so that we can save lives depends on the ability to have confidence and information about what has actually transpired,” Pompeo said.