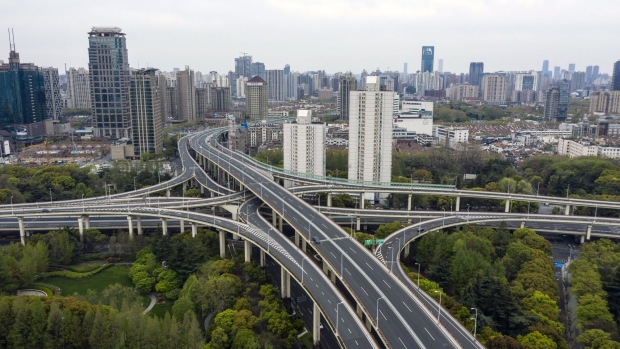 Empty roads during a phased lockdown due to Covid-19 in Shanghai, China, on Tuesday, April 5, 2022. Shanghai reported more than 13,000 daily Covid cases for the first time, as a sweeping lockdown of its 25 million residents and mass testing uncovered extensive spread of the highly infectious omicron variant. Photographer: Qilai Shen/Bloomberg , Bloomberg

(Bloomberg) -- China announced another stimulus measure to finance infrastructure projects, part of its push to drive investment and increase employment in the second half of this year as the economy starts to recover from the effects of Covid lockdowns.

The government will raise 300 billion yuan ($44.8 billion) to finance infrastructure projects by selling financial bonds and other methods, the State Council chaired by Premier Li Keqiang decided Wednesday, according to a report by the official Xinhua News Agency. Those bonds are usually sold by policy banks. The money will be used to replenish the capital of major projects such as new types of infrastructure, the statement on Thursday said.

These types of financial tools can help “expand effective investment, drive employment and facilitate consumption” and allow China to stick to its stance of “not flooding the economy with stimulus or over-printing money,” the meeting concluded, adding that this will help banks achieve a better match between their loans and deposits and improve the transmission of monetary policy.

Infrastructure projects are a key factor in determining how fast the economy can grow in the remaining six months of this year as other sources of growth such as housing and private consumption are still slowing. President Xi Jinping pledged last month to strive to meet economic targets for the year, although Beijing’s Covid Zero strategy has caused analysts to cut their forecasts for annual growth to levels far below the official goal of around 5.5%.

The new money is in addition to the 800 billion yuan the three policy banks were told in June to lend for infrastructure projects. That loan quota has already been allocated to the policy banks, local newspaper the 21st Century Business Herald reported Friday, citing sources it didn’t identify.

Read more: What Are the Policy Banks China Uses to Spur Economy?: QuickTake

The size of the additional bonds is only a fraction of what the policy banks normally issue in a year. The banks sold a gross amount of 5.5 trillion yuan bonds in the interbank market last year, with a monthly average of 460 billion yuan, according to Bloomberg calculation based on Chinabond and Shanghai Clearing House data. Between January and May this year, they issued 2.3 trillion yuan in bonds.

The State Council, the cabinet, also vowed to implement a batch of investment projects that are aimed at increasing workers’ income and boosting their consumption. These projects will have to spend over 30% of central government funding on paying workers, up from 15% previously.