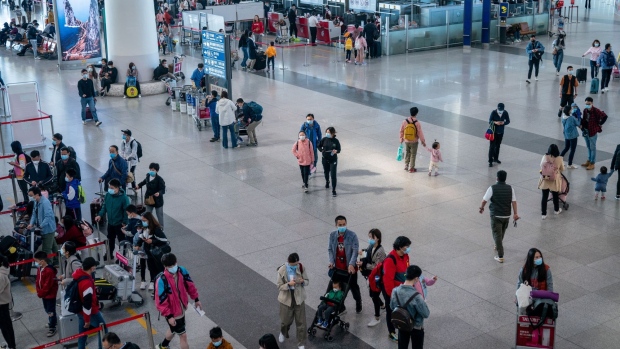 Travelers walk through Beijing Capital International Airport in Beijing, China, on Saturday, May 1, 2021. Tickets for everything from domestic flights to theme parks are rapidly selling out in China ahead of its Labor Day holiday as the nation’s recovery gathers pace. , Bloomberg

(Bloomberg) -- China’s aviation regulator advised against international travel during national holidays later this month and in October due to coronavirus outbreaks overseas and the low volume of international flights.

Prior to the pandemic, Chinese travelers were major sources of tourist income for countries globally, but numbers have dropped sharply due to the virus and tight restrictions on movement even as places such as Europe reopen.

Domestic air travel has been more robust, though that hasn’t been immune to outbreaks and subsequent clampdowns. Passenger volume slumped over 50% from a year earlier to 22.4 million trips in August, largely because of a Covid flareup in Nanjing, the Civil Aviation Administration of China said Tuesday.

China now faces another outbreak in the southeastern province of Fujian and has locked down the city of Xiamen. Still, CAAC said domestic air traffic will increase in October from summer. Public holidays are looming, with Mid-Autumn festival from Sept. 19 to 21 followed by the National Day break from Oct. 1 to 7.

China’s top three airlines warned earlier this month that curbs on international travel could last into 2022. Passenger traffic within China took a hit earlier this year during the Lunar New Year holiday -- a peak travel period -- as the government encouraged people to stay home due to another outbreak.