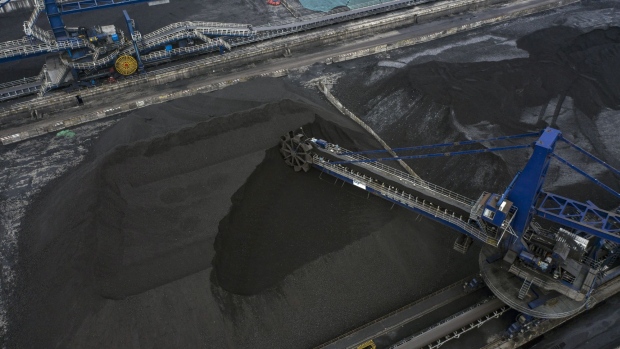 A stacker-reclaimer operates at a coal stockpile site in Taicang, Jiangsu Province, China, on Saturday, Oct. 23, 2021. Coal futures in China extended a decline to more than 20% in three days as authorities continue to take action to tackle the nation’s energy crisis. Photographer: Qilai Shen/Bloomberg , Bloomberg

(Bloomberg) -- China plans to limit the price miners sell thermal coal for as it seeks to ease a power crunch that’s prompted electricity rationing and even caused a blackout in a major city last month.

Beijing aims to cap the price of its most-popular 5,500-NAR grade coal at 440 yuan ($69) a ton at the pithead, according to people familiar with the situation, who asked not to be identified as they aren’t authorized to speak publicly. That price, which includes taxes, is a target rate, and there will be an absolute ceiling at 528 yuan, the people said.

The plan, which is scheduled to last until May 1 next year, is pending approval by the State Council, and could be revised, according to the people. The National Development & Reform Commission, the top economic planner that’s in charge of energy prices, didn’t immediately respond to a phone call seeking comment.

The energy crisis that’s engulfed the world’s second-largest economy started in part due to skyrocketing coal prices, which caused almost all coal-fired power plants in the country to run at losses. Zhengzhou’s benchmark coal futures rose to a record above 1,980 yuan a ton earlier this month, while spot prices soared even higher.

Beijing also wants downstream sales prices to be controlled, though it will let local governments set standards to limit the price of local coal trading, the people said. Coal importers will obtain subsidies to balance their losses, they said.