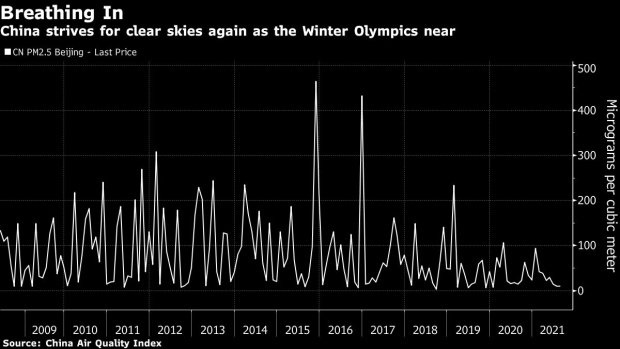 Tangshan will extend existing steel curbs to March 13 next year to ensure good air quality for the games, researcher Mysteel reported, citing a draft document issued by the city’s environment office. Air pollution in Tangshan should fall by at least 40% year-on-year in the days leading up to and during the Games, which start on Feb. 4.

The city’s steelmakers account for 8% of global output, and are a regular target when authorities in the nearby capital want clean air for high-profile events. When Beijing hosted the Summer Olympics in 2008, authorities shut a swathe of factories in the industrial regions near the capital. The operation, dubbed “Olympic Blue”, was a success: Beijingers enjoyed blue skies for an entire month.

Steel mills in Tangshan will have to keep in place production curbs ordered this year but which are due to expire on Dec. 31, according to Mysteel. Other measures to boost air quality include curbs on heavy vehicles and cement production, and switching more transport to clean fuels.

The Olympics curbs come amid a gathering nationwide push to reduce steel output after production smashed records in the first half of the year. Mills in Tangshan -- which churned out 144 million tons in 2020 -- will have to reduce production by 12.4 million tons this year, while the broader Hebei province is aiming for a 21.7 million-ton reduction.

Futures for iron ore are heading for their lowest close since November on the Dalian Commodity Exchange on fears that weaker steel output means lower demand for the raw material.

The document cited by Mysteel sets specific targets for air pollution while the Games are underway. Tangshan’s hourly concentrations of PM2.5 -- toxic, ultra-fine dust -- should not exceed 75 micrograms per cubic meter during the opening or closing ceremonies, and the daily average shouldn’t exceed that level throughout the games, it said.

Tangshan is about 150 kilometers (93 miles) from the Bird’s Nest stadium that will host the opening ceremony. The organizers of the Olympics haven’t confirmed whether foreign or domestic spectators will be allowed to attend the Games.