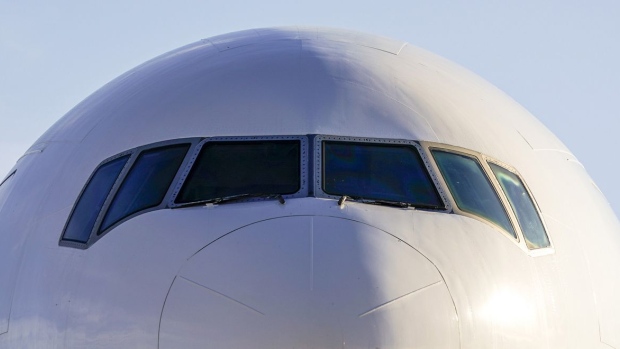 (Bloomberg) -- China Aircraft Leasing Group Holdings Ltd. is considering selling some of its assets outside greater China that could raise about $3 billion in a transaction, according to people familiar with the matter.

The Hong Kong-listed company is looking to divest around 40 aircraft and approximately 180 aircraft production slots, said the people, who asked not to be identified as the information is private. CALC, as the company is known, has reached out to prospective buyers for the assets, the people said.

Considerations are at an early stage and CALC could decide against any deal, the people said. A representative for the company didn’t immediately respond to requests for comment.

A potential divestiture could come as aircraft lessors have picked up an increasing share of the market for jets since the start of the pandemic, as airlines look to finance plane purchases without risking their own balance sheets.

While the fast-growing industry has already seen some consolidation moves recently, rising interest rates could make it harder for smaller lessors to raise cash to fund aircraft purchases.

Founded in 2006, CALC is one of China’s largest aircraft lessors, serving clients across 17 countries, according to its website. The Hong Kong-based company’s business includes aircraft leasing and sourcing, aircraft trading and portfolio sale, fleet maintenance and disassembly. Its combined asset value of owned fleet and order book assets totaled $15.6 billion as of the end of 2021, ranking eighth globally, its website shows.

The company raised about HK$729 million ($94 million) in an initial public offering in Hong Kong in July 2014. Its shares have dropped about 21% so far this year, giving the firm a market value of around $432 million.

CALC owned and managed 163 aircraft and had an order book backlog for 241 new aircraft as of June 30. Airlines in Greater China account for about 77% of its clients based on the number of aircraft. It reported a net loss of HK$130 million for the first half as the company had to write off two aircraft after terminating leasing agreements with Russian lessees amid sanctions. The company said it’s actively seeking to repossess the assets.

--With assistance from Danny Lee.