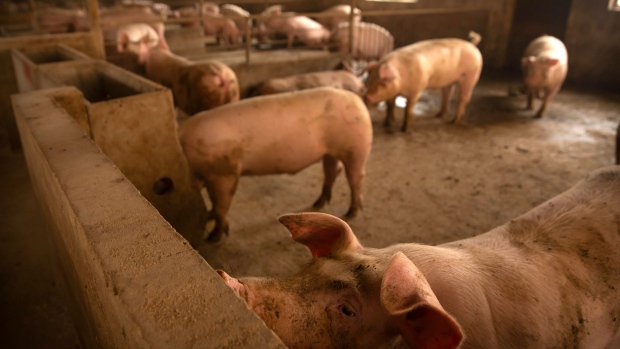 In this May 8, 2019, photo, pigs stand in a barn at a pig farm in Panggezhuang village in northern China's Hebei province. , (AP Photo/Mark Schiefelbein)

Inside a fortress-like megafarm on the outskirts of Beijing, dozens of pink-and-black pigs forage and snooze, unfazed by the chilly spring air. These experimentally bred hogs are fortified with a gene for regulating heat, buffering them against northern China’s hypothermia-inducing winters.

The gene that researcher Jianguo Zhao inserted into the pigs’ DNA is among dozens of examples of genetic engineering underway in China—and in rival laboratories across the world—to create super pigs. For years, the quest was for better-tasting, stronger, and faster-growing swine. Now, in the wake of a devastating global outbreak of African swine fever, the more crucial need is to safeguard food security, and keep hogs alive.

“The most burning question for scientists is how to make the pig more healthy,” says Zhao, 45, who heads a 20-strong group of researchers and technicians at the state-run Chinese Academy of Sciences’ Institute of Zoology in Beijing, where he’s become a superstar in the world of swine genomics.

China’s ambitions, though, extend well beyond farm animals. In dozens of labs across the country, scientists are ⁠racing researchers in the U.S. and Europe to develop superior lines of food and fiber crops, while others are pushing the boundaries of medical science—sometimes facing criticism—by editing the human genome to correct disease-causing mutations or susceptibility to infections like HIV.

It’s a biotechnology arms race happening against the backdrop of a disruptive trade war with the U.S., a rapidly aging population, and diminishing resources to feed China’s 1.4 billion people. Soaring pork prices prompted the State Council, China’s cabinet, in September to call for the greater use of science and technology, among other measures, to boost production of the country’s staple meat.

China’s investment in research and development has already catapulted the world’s most populous nation from relative obscurity in biomedical science to behemoth in less than two decades.

China outspends every other country barring the U.S. on research and development—$445 billion in 2017. Chinese firms have also stepped up acquisitions of foreign biotechnology and pharmaceutical companies, with $25.4 billion in deals since the start of 2014, according to data compiled by Bloomberg.

But teams in the U.S. and Europe currently have a critical edge, including something China desperately needs: protection from major pig-killing diseases.

China has sought to redress that by sending abroad promising scientists, like Zhao, to learn from the world’s best, then bringing them home and furnishing them with industrial-scale resources. The campus that houses Zhao’s gene-edited pigs is ring-fenced by three layers of security checkpoints and can accommodate 4,000 hogs. 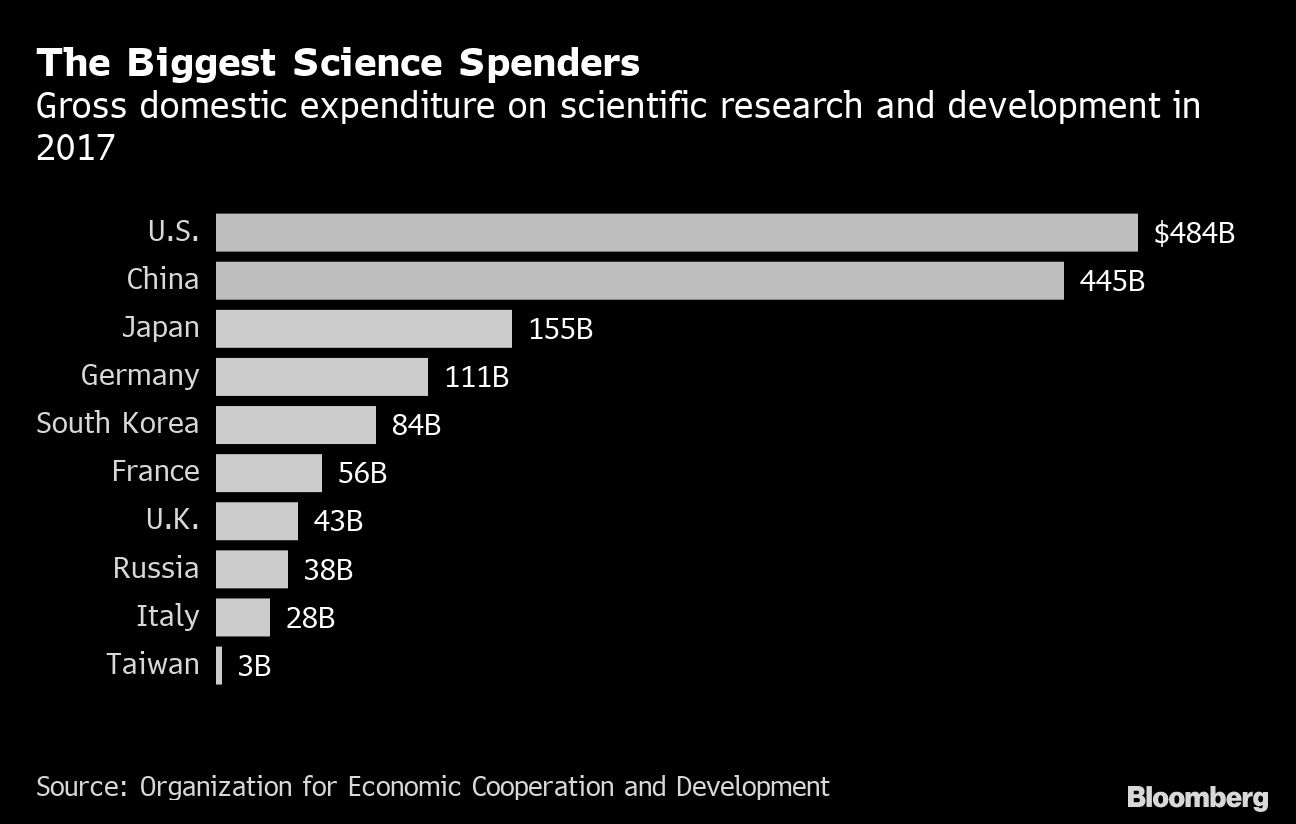 “The powerhouse these days is China,” said Simon Lillico, 47, a scientist at the University of Edinburgh’s historic Roslin Institute, where Dolly the sheep became the first mammal cloned from an adult cell in 1996. “They are spending so much money and throwing so much resource at science that we can’t even come close to competing with the amount of money that they are investing in this sort of science, so we need to be smart about what we do.”

China’s market for biologic drugs and agricultural biotechnology remains a fraction of the U.S.’s estimated $228 billion industry, but the upsurge in Chinese investment is already causing anxiety in Washington. In July, the U.S.-China Economic and Security Review Commission pledged to investigate the potential risks of America’s growing reliance on Chinese biotechnology and medicines.

Of concern “is the potential for the U.S. to become dependent on China for important pharmaceuticals or other health-care technologies,” said Mark Kazmierczak, a molecular biologist with consulting firm Gryphon Scientific who wrote a report on the industry for the U.S. security review panel. “China’s access to personal information of U.S. citizens, including DNA sequence data, also poses privacy concerns.”

Our reporter took DNA tests in the U.S., and China. Read about why the results concerned her.

Zhao, who grew up in rural Shandong province, embodies the zeal with which China is pursuing genomics, the science of analyzing an organism’s complete DNA sequence. After receiving his doctorate in animal genetics and breeding from an agricultural university in Harbin in 2003, he worked for a few years as an assistant researcher at a medical genetics institute in Shanghai.

Techniques for modifying genomes were slow at the time, he recalls. To expedite his research, he headed to the University of New Orleans a few months after Hurricane Katrina hit in 2005 to train under reproductive physiologist Barry Bavister. Decades earlier, work by Bavister had led to the first successful in vitro fertilization of a rhesus monkey, paving the way for the world’s first test-tube baby in 1978.

After that, Zhao spent three years at the University of Missouri in a lab run by Randall Prather, another swine geneticist. Prather, 60, helped Zhao refine his gene-editing skills, which the Chinese scientist then used after he returned home in 2010 as a principal investigator with the Institute of Zoology’s State Key Laboratory of Stem Cell and Reproductive Biology in Beijing.

“He’s been a friend, and colleague—and competition,” said Prather, a 30-year animal-science veteran and head of the National Swine Resource and Research Center in Columbia, Missouri. “He’s competing to be the first to make genetic modifications in pigs and beat us. And I’m trying to beat him.” Prather and Zhao say the rivalry is friendly. 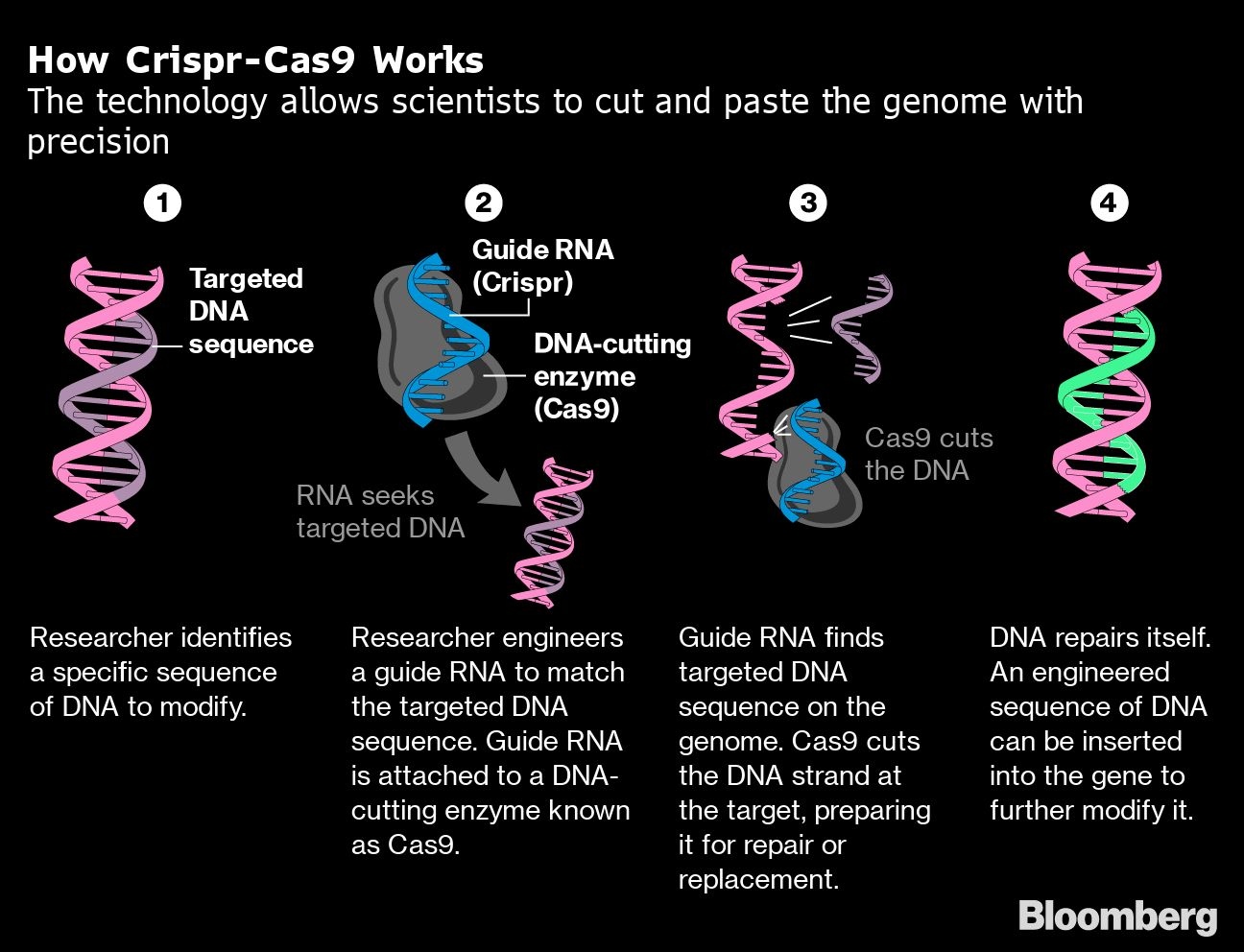 Zhao says he started using Crispr after needed materials were donated to labs in China and other nations by a team led by Feng Zhang, a Chinese-American biochemist at the Massachusetts Institute of Technology who pioneered development of the genome-editing tool.

The technique put Zhao’s research into hyperdrive. In 2016, he led the Chinese team that demonstrated for the first time it was possible to use Crispr to knock out three pig genes in one step, speeding the development of animals that can serve as models for studying human diseases.

The following year, Zhao and colleagues showed they could make pigs less susceptible to cold weather by using Crispr to endow the animals with the so-called UCP1 gene, which is found in most mammals and helps them form heat-producing brown fat. The gene-altered porkers also have almost 5 percent less white fat, making their meat leaner, the scientists found.

Chinese researchers have used the gene-editing tool to develop mildew-resistant wheat, musclier police dogs and woollier goats. More controversially, a Chinese scientist used the tool to genetically alter twin babies in an effort to make them resistant to HIV, igniting a global outcry. China has embraced the technique like no other nation, publishing twice as many Crispr-related agricultural papers as the second-place country, the U.S., according to the journal Science.

In pigs alone, Chinese researchers have successfully made 40 different genetic modifications with Crispr, Science reported in July. Zhao has been among those leading the way.

“He’s doing great stuff,” Prather told the journal. “I’ve trained all my competition over there, and I’ve trained them well.”

Livestock modified by Crispr may take longer to develop and face significant regulatory hurdles. Still, “whoever can capitalize on this technology will have a distinct economic advantage as the technology will likely enable large gains in productivity,” said Kazmierczak, the Gryphon molecular biologist.

Five thousand miles away from Beijing, at Scotland’s Roslin Institute, scientists have been working on genetically edited animals for more than two decades. Lillico and colleagues, based at Midlothian, on the outskirts of Edinburgh, reported in 2016 pigs that could potentially resist African swine fever. The work was done by manipulating a gene called RELA in farm-bred pigs to resemble one in warthogs that’s associated with their ability to survive infection.

There’s no treatment or vaccine for the virus, which has spread from Africa to Europe and now Asia, where it’s led to the deaths and destruction of about a quarter of the planet’s hogs. Creating pigs that can naturally thwart the disease would represent the holy grail of porcine genetic engineering.

Results from a test that would show whether the gene-edited pigs resist infection from the hemorrhagic virus could be published next year, Lillico said. He referred further questions to Genus Plc, one of the world’s largest livestock genetics companies, which co-funded the study with a British government agency. Genus did not respond to requests for comment.

Porcine reproductive and respiratory syndrome, also known as PRRS or blue ear disease, killed 400,000 pigs in China in 2006, and infected millions. The virus, which leads to stillborn piglets and lung infections, infects swine by targeting a protein on the surface of white blood cells called CD163. Prather and colleague showed in 2015 that by editing the gene that makes the CD163 protein, they were able to produce pigs resistant to the virus. Further research demonstrated that the resistance can be inherited by offspring of gene-altered sows. 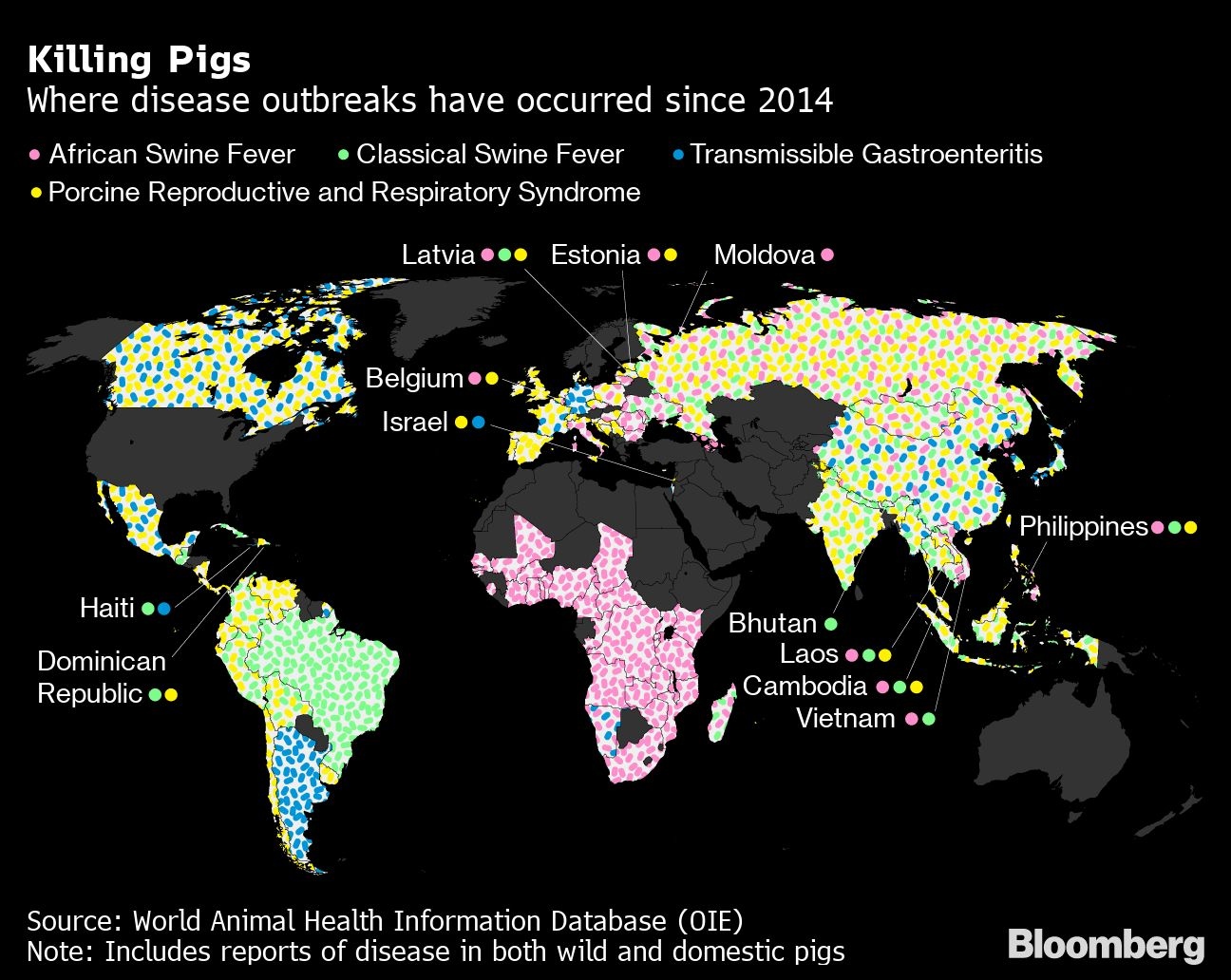 It was a game changer for the pork industry, which China dominates with a market worth about $118 billion a year that represents about half of global demand. While genetically modified food-animals are yet to be approved for sale there, Genus is betting that barrier will eventually be lifted.

The gene-edited hogs developed by Prather were licensed to Genus’s pig improvement unit. It announced a pact in May with a breeder that’s part-owned by the Beijing municipal government to research, develop and secure regulatory approval for virus-resistant pigs in China. Genus said it expects to earn as much as $160 million and additional royalties if that happens.

Chinese researchers are racing to close the gap. At Jilin University, located in the northeastern province bordering North Korea, scientists last year developed gene-edited pigs that are protected from classical swine fever virus. The Chinese Academy of Agricultural Sciences in Beijing is starting trials of an African swine fever vaccine.

Zhao said he and other Chinese scientists are lobbying the government to reconsider its policies on gene-edited animals, starting by distinguishing between animals with and without genes from non-pig organisms. Still, he doubts that his leaner pigs will be consumed as bacon anytime soon.

But China doesn’t have years to make up a disease-induced, 10 million-ton shortfall in pork supply that’s sent prices to a record.

It’s possible there are hogs in the wild, or even on commercial farms, that are naturally resistant to certain viruses, said Christine Tait-Burkard, a cellular biologist at Roslin.

But finding that “one-in-a-million pig” is difficult because nobody tests for them, she said. “You either find a mutant, or make one yourself.”