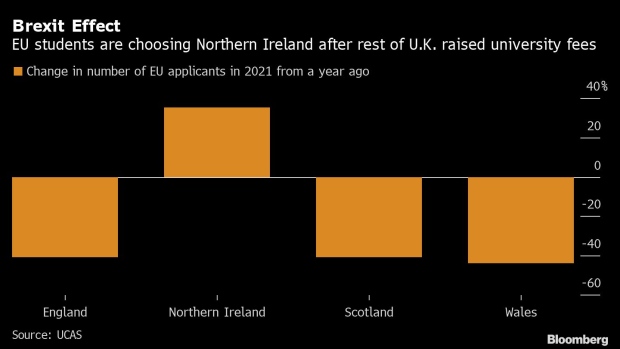 Pedestrians and cyclists pass Magdalen College, part of Oxford University, in Oxford, U.K., on Wednesday, May 27, 2020. The U.K. government's plans to allow most stores to reopen can't come soon enough for retailers, with new figures showing the ongoing damage from the lockdown. Photographer: Chris Ratcliffe/Bloomberg , Bloomberg

(Bloomberg) -- Chinese applications to U.K. universities now outstrip the total number of would-be students from the European Union, highlighting the impact of Brexit and the sector’s growing reliance on China even as relations cool between London and Beijing.

Applicants from the EU dropped by 43% to 28,400, according to data from the U.K. university admissions service UCAS. That compares with 28,490 applications from China, a number that has more than doubled since 2017.

The sharp decline in applicant numbers from the EU was “disappointing” but expected, according to Stephanie Harris, head of engagement at Universities U.K., a lobby group. Rule changes since Brexit mean EU students now pay higher international fees at most British universities.

Fees for international students are typically higher than the 9,250 pound ($12,900) maximum charged for domestic tuition by English universities. That means the drop in numbers from the bloc isn’t currently a financial concern. Nevertheless, Harris cautioned that the “diversity of experience on campus” risks being undermined unless the U.K. government does more to attract European students.

International students contributed an estimated 22.6 billion pounds to the U.K. economy in 2015/16, according to a 2018 report by the Higher Education Policy Institute. The government aims to grow that figure to 35 billion pounds a year by 2030. Only Northern Ireland, which still charges local rates to EU applicants, saw a rise in applicants from the bloc in 2021, UCAS data showed.

The applicant breakdown is likely to raise questions about whether British universities are becoming over-reliant on students arriving from China, according to Nick Hillman, the Institute’s director.

The shift comes at a time of growing tensions between the U.K. and China, on issues ranging from the future of Hong Kong to Xinjiang and intellectual property theft. British intelligence agencies have also raised concerns over links between universities and the Chinese government, amid claims sensitive defense technology is being passed to Beijing.

“British universities would feel a very chill wind if Chinese students stopped coming,” Hillman said. “There aren’t enough students coming from other countries around the world, relative to the Chinese numbers.”

The operating model of a British university is to take a loss on “almost everything” except international students, who provide the revenue to fund university research, Hillman said.

“The reason people think that British universities are some of the best in the world is because our research is so good,” he added.