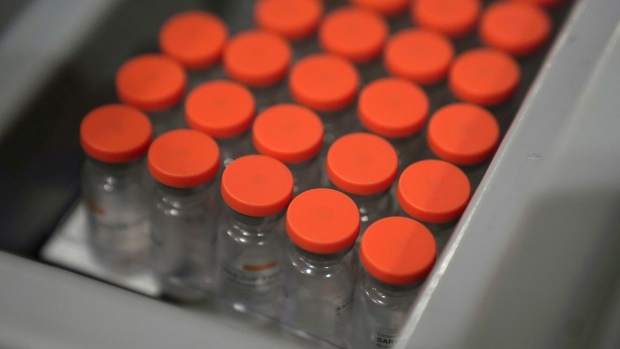 A tray with vials of the Sinovac Biotech Ltd. Covid-19 vaccine during a vaccination at Tanah Abang market in Jakarta, Indonesia, on Wednesday, Feb. 17, 2021. President Joko Widodo seeks to inoculate more than 180 million people to reach herd immunity by the end of the year, a plan that’s been hampered by the limited supply of vaccines globally. Photographer: Dimas Ardian/Bloomberg , Bloomberg

(Bloomberg) -- China has approved two Covid-19 vaccines produced by Sinovac Biotech Ltd. and Sinopharm for emergency use in people aged three to 17, as the country races to inoculate its more than 1.4 billion people.

The two shots were given the green light after expanded clinical trials found they were safe and capable of stimulating a strong immune response among children and teens, Shao Yiming, a researcher with the Chinese Center for Disease Control and Prevention, said at a briefing Friday in Beijing.

Officials didn’t say when they would begin administering the shots.

Sinovac’s Chief Executive Officer Yin Weidong said earlier this month that Phase I and Phase II research had involved several hundred participants and showed that the company’s vaccine was as safe and effective for children as for adults.

Covid vaccinations have covered some 620 million people in China as of June 10, said Cui Gang, an official at the National Health Commission’s disease prevention and control bureau, with the world’s most populous country forging ahead with widespread inoculations despite having no plans to open up its borders. China had largely managed to stem the spread of the virus, but has in recent weeks been grappling with a flareup in southern Guangdong province.

China Can’t Open Up Like U.S. Despite Vaccination, Official Says

China’s accelerated vaccine drive comes as the U.S. pushes for a new inquiry to determine how Covid emerged, including whether it leaked from a lab in the central city of Wuhan. Group of Seven leaders are set to call this weekend for a fresh World Health Organization-convened study into the origins, Bloomberg reported.

NHC spokesman Mi Feng dismissed the theory, saying the result of the report from the virus origin probe jointly conducted by experts from China and the WHO showed that SARS-CoV-2 was unlikely to have been leaked by a lab.