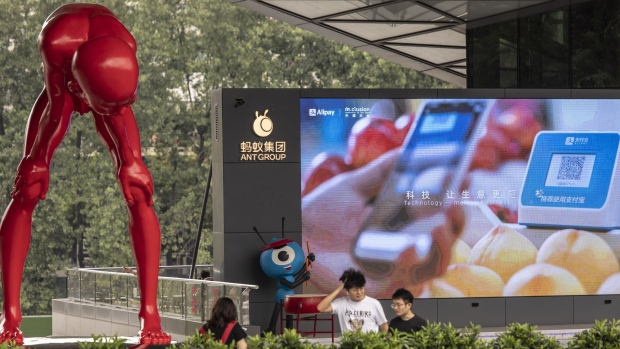 (Bloomberg) -- Chinese President Xi Jinping chaired a meeting Wednesday that approved promoting the “healthy” development of the payment and fintech sectors, a sign that a broad crackdown on tech companies like Ant Group Co. may be easing.

The meeting of the central commission for deepening overall reform also backed enhancing regulation of major payment platforms, state broadcaster China Central Television reported, adding that companies would be encouraged to return to their roots while the authorities will improve regulation.

As part of the plans, China would ensure the security of payment and financial infrastructure, and work to prevent and defuse systemic financial risks, CCTV said. The government will also enhance oversight of financial holding companies and financial institutions invested by platform firms, the report said, without adding details.

Beijing has promised to unwind crackdowns that torpedoed Ant’s record initial public offering in 2020 and ensnared every sector from online education to gaming. Once Ant is able to set up the financial holding company, it can fold key operations into the entity, following a framework laid down by the central bank last year.

A meaningful relaxation of curbs on Ant -- one of the most high-profile casualties of Xi’s sweeping clampdown -- would send a powerful signal that policy makers are following through on recent pledges to support the industry. The Communist Party’s evolving stance toward the private sector has become one of the most closely watched developments in global markets in recent years, with some observers even calling China’s sprawling internet sector uninvestable.

While Ant has said it has no plans to initiate an IPO, the company’s Chairman Eric Jing said last year that it would eventually go public.