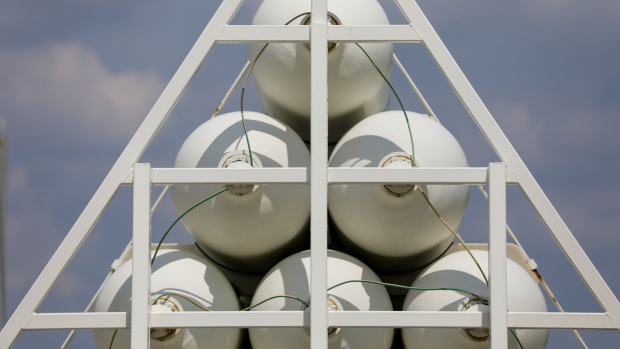 Tanks of hydrogen stand near the hydrogen electrolysis plant at Energiepark Mainz, operated by Linde AG, in Mainz, Germany, on Friday, July 17, 2020. Europe is pinning its green hopes on hydrogen in a plan that sees hundreds of billions of euros in investment flowing into the clean technology and fueling a climate-friendly economic recovery. Photographer: Alex Kraus/Bloomberg , Bloomberg

(Bloomberg) -- The Chinese region of Inner Mongolia has approved a massive power project that will use solar and wind to produce green hydrogen.

Inner Mongolia’s Energy Administration has given the go ahead to a cluster of plants in the cities of Ordos and Baotou that will use 1.85 gigawatts of solar and 370 megawatts of wind to produce 66,900 tons of green hydrogen a year, the Hydrogen Energy Industry Promotion Association said in a report. Development will begin in October and the projects will be operational in mid-2023, the association said, without specifying the cost or the developers.

The project, which would produce enough hydrogen output to displace about 21 million gallons of gasoline a year if it were used for fuel cell vehicles, is the biggest yet to be spearheaded by the government, according to BloombergNEF analyst Xiaoting Wang. China’s booming hydrogen industry still has bottlenecks -- including how the fuel is stored and used -- that need to be tackled in the next five years, Securities Daily said in an article on Wednesday.

Less than 20% of the power from the Inner Mongolian development will go to the grid, with the rest dedicated to green hydrogen. While several projects have been announced in China that combine renewables with green hydrogen, most are intended for electricity generation first, with the hydrogen component just window dressing to help get approval, Wang said.

The project will, however, require at least 465 megawatts of electrolyzers to produce that much hydrogen, she said, adding that global electrolyzer shipments were just 200 megawatts in 2020 and are forecast to be 400 megawatts this year. “These projects will install more electrolyzers than the entire global market in 2021,” Wang said.

The biggest Chinese green hydrogen projects so far have come from industrial giants like Sinopec or Ningxia Baofeng Energy Group, which is set to complete a 150-megawatt solar-powered electrolyzer array this year at one of its petrochemical plants. China Baowu Steel Group has announced plans for 1.5 gigawatts of renewable-powered electrolyzers, without providing timing.