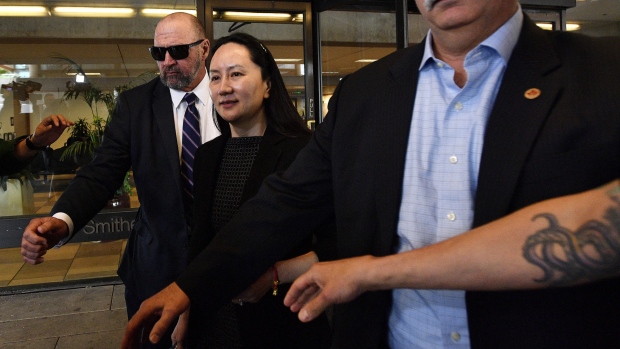 Meng Wanzhou in Vancouver on May 8. , Bloomberg

(Bloomberg) -- China formally arrested two Canadians detained for months, a Canadian newspaper reported, in cases that have strained tensions between the two countries.

Former diplomat Michael Kovrig and entrepreneur Michael Spavor have been moved from residential surveillance at an unknown location to an official detention center, the Globe & Mail said Thursday, citing a government source who was granted anonymity because they weren’t allowed to speak about the issue. Neither man has been formally charged with a crime, the paper said, without saying exactly when the arrest took place.

Read more: Chinese Arrests Are All Too Familiar for Past Canadian Detainees

A news portal run by China’s Central Political and Legal Affairs Commission previously accused Kovrig -- on leave from Canada’s foreign service -- of spying and stealing state secrets while employed by the International Crisis Group, and said Spavor was his primary contact and supplied him with intelligence.

The men were detained separately in December in a move seen by some in the west as retaliation for the arrest of Huawei Technologies Co. chief financial officer Meng Wanzhou in Vancouver at the request of the U.S. They have since languished in China’s opaque legal system, allowed sporadic visits by Canadian authorities but denied access to lawyers.

The arrests come amid escalating tensions between China and the U.S. over Huawei. President Donald Trump this week moved to restrict Huawei’s ability to do business with U.S. companies. Ongoing trade talks between the two sides stalled last week, and Trump has moved to slap billions of dollars of new tariffs on Chinese goods.

Held in isolation, the two Canadians were questioned multiple times a day -- Kovrig on his activities as a diplomat -- and unable to turn off the lights in their cells, Bloomberg reported in December. Canada sees the interrogation of Kovrig as violating the Vienna Convention -- to which China is a signatory -- that confers ongoing immunity for that period in his life.

(Updates with past China Foreign Ministry comment in fourth paragraph.)

--With assistance from Derek Wallbank and Jihye Lee.

To contact the reporter on this story: Karen Leigh in Hong Kong at kleigh4@bloomberg.net

To contact the editors responsible for this story: Brendan Scott at bscott66@bloomberg.net, Daniel Ten Kate