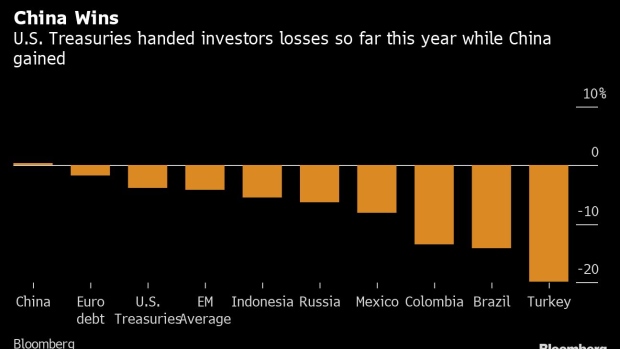 (Bloomberg) -- In the debate over whether China can vie with Treasuries as a haven during times of turmoil, more bond investors are lining up on the side of China.

Ashmore Group Plc, one of the biggest emerging-market firms with almost $100 billion under management, added to the chorus on Wednesday with a report making the case for Chinese debt in strategic portfolios. Ashmore points to China’s strong performance in the first quarter in the face of losses across global bond markets.

“China’s emergence as a new and credible safe haven destination for bond holders should gradually chip away at the status of the dollar and U.S. Treasuries as the only safe place to hide,” said Gustavo Medeiros, Ashmore’s deputy head of research.

With the rout in U.S. Treasuries forcing investors to question their positions, there’s a growing contingency that’s turning to China. Investors at JPMorgan Asset Management and Brandywine Global Investment Management LLC are also among those who have voiced a preference for Chinese debt and back the view that the country can be a viable haven.

That China could be a refuge for bond investors isn’t new, but the discussion is being revived as the country’s economy powers out of the pandemic and becomes a bigger force in global markets. China’s government bonds are now included, or on a phased path to inclusion, in major international bond indexes.

To Luca Paolini, the chief strategist at Pictet Wealth Management, there’s a good chance China will outperform in the long term. The nation’s debt is up 0.7% this year in dollar terms and the 10-year yield stands at 3.2%, almost double the rate for Treasuries.

Still, it’s a view with some controversy and the world of Chinese debt is vastly different from the $21 trillion Treasury market. For starters, it’s about a fraction of the size of the U.S., and international funds must wade through rounds of paper work to access it. China is also looking to curb a rapid buildup in financial leverage, which means the central bank may guide borrowing costs higher.

“I would not yet call them a safe haven,” said Jim Veneau, head of Asian fixed income at AXA Investment Managers. “The market is still partially closed/controlled and China is still in the very early stages of deleveraging, a process that was put on hold due to the trade war and Covid.”