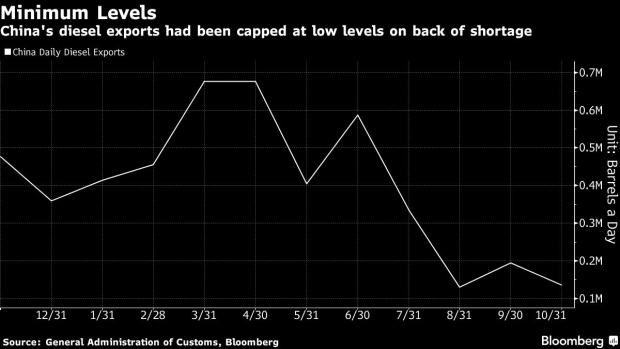 (Bloomberg) -- China has averted a full-scale diesel crisis after refiners quickly ramped up production, with excess supply poised to flow into a regional market starved of the industrial fuel.

Top processors China National Petroleum Corp. and China Petroleum & Chemical Corp., better known as Sinopec, started boosting production in September under government coordination as demand surged following a broader energy crunch. While some fuel retailers were forced to ration diesel volumes and at least one refiner imported the fuel to meet rising consumption, the nation’s output rebounded in October to the highest level in 13 months.

Refiners now have a surplus of diesel that can be shipped to international markets. China had retreated from the export market to conserve its domestic supplies, which left consumers turning to India and South Korea to meet their needs as economies rebounded from the pandemic.

Diesel consumption had surged since September due to seasonal factors such as more demand from the fishing industry and for crop harvesting, while an energy crunch after natural gas and coal shortages led to greater use of the fuel in power generation. Demand has since eased and domestic stockpiles are expanding. OilChem estimated inventories held at independent refineries, fuel traders and state-owned sales companies were at a 7-week high on Nov. 26.

China’s state refiners will export 210,000 tons of diesel in December, according to JLC. While that’s 86% less than the same period a year ago, it’s believed some plants had halted exports in November, the industry consultant said. Vortexa Ltd. forecast overseas shipments were trending at 55,000 barrels a day last month, which would be the lowest level since January 2015.

The resumption of China’s diesel exports could be another bearish factor for refining margins in Singapore, a proxy for Asia. Margins are back below double figures after a new variant of the coronavirus raised concerns about global demand. They were as high as $16.20 a barrel in mid-October.

“China may increase diesel exports from minimum levels seen in November, but export levels will continue to face downward pressure, mainly due to policy constraints in the form of export quota limits,” said Fenglei Shi, associate director of oil markets at IHS Markit.