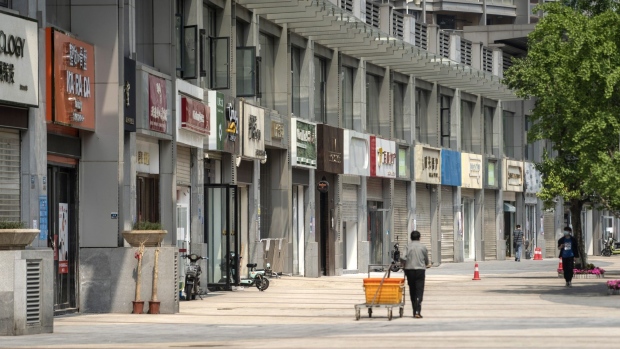 A pedestrian pulls a cart past closed stores on a near-empty street in Wuhan, China, on Friday, May 1, 2020. The lifting on April 8 of the unprecedented lockdown on Wuhan -- where the virus pathogen first emerged -- was a milestone. Stringent nationwide restrictions in China meant the world's second-largest economy recorded its deepest contraction in decades over the first quarter. Photographer: Qilai Shen/Bloomberg , Bloomberg

(Bloomberg) -- China appears to be backtracking on its recent efforts to promote street vending as a way to reboot the coronavirus-stricken economy, less than two weeks after Premier Li Keqiang made a high-profile pitch to get people back into the traditional form of commerce.

Following a surge of interest in the topic on social media and sharp gains for local stocks associated with equipment needed to sell food on the street, local governments and state media over the weekend damped expectations that the kind of informal street selling once ubiquitous in China would be welcomed back wholesale.

A Saturday commentary by Beijing Daily, the official newspaper of the Beijing municipal government, labeled the “street stall economy” as unsuitable for the capital, and said the city hasn’t relaxed rules on peddlers. Other state media followed suit, with some editorials arguing that there were many problems including food hygiene and product quality.

With China facing its worst economic slump since the 1970s this year, the government is pushing to keep workers in jobs and laid-off employees diverted into retraining or other sectors. At the same time, the premier’s endorsement of street selling at the National People’s Congress last month raised eyebrows, as it’s a form of commerce at odds with President Xi Jinping’s vision of China as a developed, high-tech superpower.

At the press conference on May 28, Li referenced an unnamed city in China’s western region that added 100,000 jobs “overnight” with 36,000 mobile stalls. In a recent trip to Shandong, Li praised the “street stall economy” as “the vitality of China.”

In many Chinese cities, neighborhoods and city centers were traditionally served by people working in night markets or operating stalls and carts selling local specialties and snacks from around the country, such as grilled meat skewers, fried noodles or breakfast items.

In recent years the practice has become less popular and employed fewer people, partly due to the desire of local authorities, including Beijing’s, to “clean up” the appearance of cities.

On social media, trending topics have shifted from enthusiasm over the return of the vendor economy to those questioning it. The hash-tag “street stall economy” has been taken down from the Twitter-like site Weibo, whereas it was active and searchable a few days ago. Taking its place, the top suggested hash-tags are now “the heating-up in street stall economy shouldn’t turn into a fever” and “street stall economy is not suitable for Beijing.”