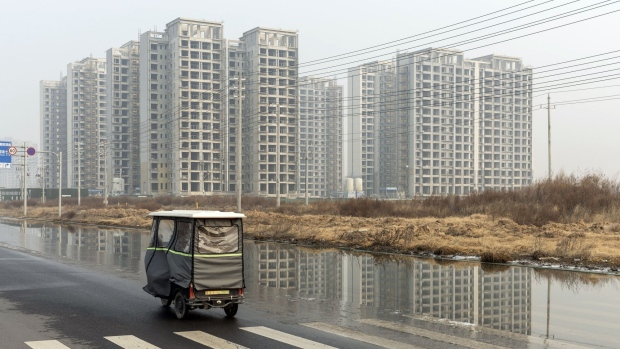 (Bloomberg) -- Chinese financial regulators and the nation’s biggest bad-debt management companies plan to offer as much as 160 billion yuan ($24 billion) of refinancing support to high-quality developers in the first quarter, according to people familiar with the matter.

Under the plan first announced on Friday with little details, the People’s Bank of China will channel 80 billion yuan of loans through China Huarong Asset Management Co. and its peers to selected developers at an annual rate of 1.75%, the people said, asking not to be identified because the matter is private. The distressed debt firms are encouraged to match the amount from their own coffers, the people added.

The loans add to a clutch of measures issued since November to arrest the slump in China’s property market. Regulators are ramping up financial support to systemically important developers, while lowering mortgage rates and down payment requirements to boost demand.

Yet those measures are being stifled by large-scale coronavirus outbreaks after the government suddenly abandoned its Covid Zero policy. Confidence among businesses and consumers has yet to recover to pre-pandemic levels. New-home prices in 70 Chinese cities fell for a 16th month in December, official figures showed Monday.

Instead of issuing a full-on bailout, the government is now offering support to the stronger companies in the real estate market. The Financial Stability and Development Committee told banking and securities regulators to shore up the balance sheets of systemically important developers that have no auditing issues and no records of major violations, people familiar with the matter said earlier this month.

Industrial & Commercial Bank of China Ltd., the nation’s largest lender, on Monday agreed to offer 240 billion yuan of financing to 16 developers including CIFI Holdings Group, according to a statement from the lender’s Shanghai branch. China Construction Bank Corp., the second largest, also said on Monday it plans to set up a 10 billion yuan fund with China Vanke Co. to focus on rental housing projects.

For the AMCs, by taking on the savior role with state funding they could ease woes of a sector they have heavy exposure to. Aggressive lending to embattled developers during the industry’s boom years has beset the $730 billion bad-debt managers with significant credit losses, sending their bonds tumbling and forcing Beijing to weigh a preliminary plan to restructure the sector, people familiar said in August.

The four big managers — Huarong, Cinda, China Great Wall Asset Management Co., and China Orient Asset Management Co. — have lent money to the majority of the country’s top 50 developers over the years. Cinda and Huarong alone had more than 200 billion yuan in exposure, and property accounted for nearly 50% of their acquisition and restructuring businesses as of the end of June, according to their filings.

--With assistance from Zhang Dingmin and Helen Sun.

(Updates with Chinese banks’ latest support in the seventh paragraph.)