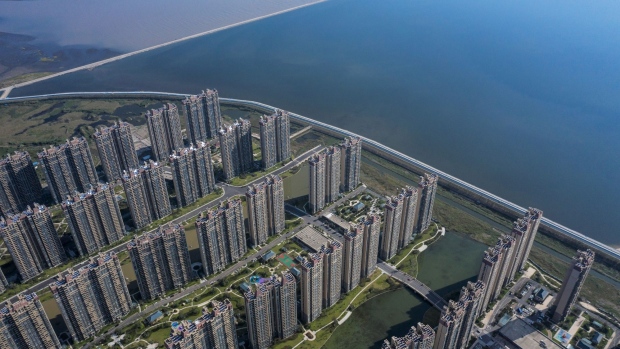 (Bloomberg) -- A number of China’s publicly-traded banks rushed to assuage investors who are concerned about risks from the deepening crisis at China Evergrande Group.

At least seven banks, including Evergrande’s principal lenders such as China Zheshang Bank Co, told investors over the past two days that they have sufficient collateral for the loans to the developer and the risks are controllable. Zheshang said Evergrande borrowings totaled 3.8 billion yuan ($588 million), while Industrial Bank Co, another major creditor, said it has gradually reduced exposure to Evergrande and fully strengthened risk management on existing business with the developer.

The world’s most indebted developer’s cash crunch has become a key focus for global investors. Risky assets plunged around the world on Monday amid fears that an Evergrande collapse might spark financial contagion and curb growth in the world’s second-largest economy, where 27% of the loans are for the real estate sector, more than any other industry.

Evergrande missed interest payments due Monday to at least two of its largest bank creditors, people familiar with the matter had said, taking the cash-strapped developer a step closer to one of the nation’s biggest debt restructurings. Banking shares tumbled on the mainland on Wednesday as China’s financial market opened after a two-day public holiday.

HSBC Holdings Plc, one of the biggest international banks in China, had yet to see any direct impact from the escalating problems at Evergrande, Chief Executive Officer Noel Quinn said at a Bank of America Corp. conference on Wednesday. HSBC’s asset management arm has been among large holders of Evergrande debt, along with the likes of BlackRock Inc. and UBS Group AG. According to data compiled by Bloomberg, HSBC held a little over $200 million of Evergrande’s dollar bonds.

Evergrande has borrowed about 572 billion yuan from banks and other financial institutions including trusts, nearly half due in less than a year, according to its latest financial statements. China Minsheng Banking Corp., Agricultural Bank of China Ltd. and Industrial & Commercial Bank of China Ltd., the top three creditors listed among the company’s principal banks at the end of last year, haven’t made disclosure on their exposure recently.

“Evergrande’s default crunch and its contagion impact present a potential systemic risk to China’s financial system,” Citigroup Inc. analysts led by Judy Zhang wrote in a note. They estimated that about 41% of the banking system assets were either directly or indirectly associated with the property sector by the end of last year and any plummet in property prices may lead to a knock-on effect on banks’ asset quality due to higher default rates in related sectors and lower collateral value.

Chinese banks, with 50.8 trillion yuan of outstanding loans to developers and homebuyers, have already been hit by surging defaults as authorities escalated their curbs on the real estate sector in recent months, including adding controls on financing for developers and pledging not to use housing as a short-term tool to stimulate the economy.

In late August, ICBC said that its non-performing loans to real estate companies almost doubled in the first half, while troubled loans to the sector at China Construction Bank Corp. jumped 28%. China Merchants Bank Co. suffered an almost fourfold jump in bad loans to real estate.