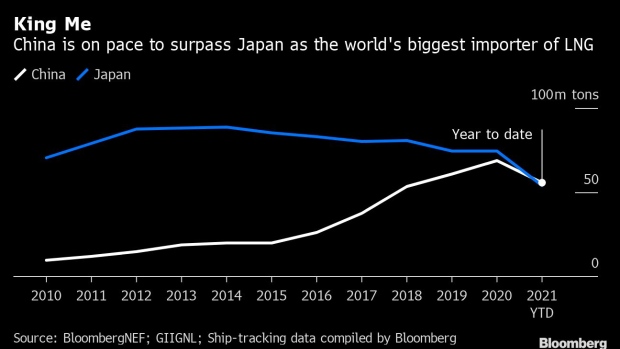 (Bloomberg) -- China is escalating its purchases of liquefied natural gas for the winter, exacerbating a global supply shortage and leaving less fuel for energy-parched Europe.

China is struggling to secure enough coal to power factories and heat homes this winter, as the world’s second-biggest economy faces a potential energy-crunch scenario similar to the chaos gripping Europe. That’s spurred some of the nation’s energy giants, such as state-owned Sinopec, to dive back into the LNG spot market, seeking shipments of the heating fuel in preparation for when temperatures turn colder.

Natural gas prices from Europe to Asia have surged to seasonal highs as the post-pandemic recovery collides with supply constraints. The situation was already strained by China’s insatiable appetite for LNG to fuel its economic rebound -- it is poised to overtake Japan as the world’s top importer of the fuel this year.

Many of China’s LNG buyers -- among the biggest in the world -- had temporarily paused spot procurement when prices began to surge over the summer. Traders were gambling that spot rates would slide. But that hasn’t happened, and now companies are jumping back into the game.

China Petroleum & Chemical Corp., known as Sinopec, released a tender on Tuesday seeking to buy at least 11 cargoes of LNG through March, one of the largest winter purchase requests by a Chinese firm in months. Smaller importers, including Beijing Gas Group Co. and Guangzhou Gas Group Co., are also seeking to buy shipments for October and November.

Sinopec was one of the most active Asian buyers last winter, often purchasing more cargoes than requested in tenders. Their return to the spot market could spook other buyers in Asia, and trigger panic buying as rivals want to secure supplies before prices potentially rally further.