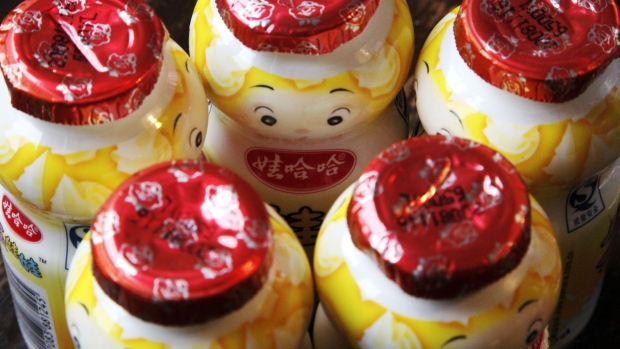 Hangzhou Wahaha Group Co., one of China’s biggest drink makers, is weighing an initial public offering that could raise more than US$1 billion, according to people with knowledge of the matter.

A listing could come as soon as next year, the people said, asking not to be identified as the matter is private. The beverage company is working with an adviser on preparations for the share sale, and has been considering Hong Kong among potential listing venues though no final decision has been made, they said.

Founded in 1987 by entrepreneur Zong Qinghou, Wahaha has grown into a food and beverage giant with products ranging from bottled water, yogurt drinks and juice to instant noodles. The company has 80 production bases and employs about 30,000 workers, according to its website. Its products are available in more than 30 countries including Canada, Singapore and the U.S., the website said.

Wahaha, which literally means a “laughing child” in Chinese, has signaled its intention for a listing last year as competition in China’s food and beverage market intensified. A listing would be “the right choice” and provide Wahaha with more resources, Kelly Zong, the founder’s daughter and an executive at the company, said in an interview with the 21st Century Herald in 2019. She didn’t provide details on preparations and timing.

The company joins fellow Hangzhou-based beverage firm Nongfu Spring Co. in seeking a first-time share offering. The bottled water company filed for its Hong Kong IPO in late April and plans to raise about US$1 billion, people with knowledge of the matter told Bloomberg News earlier.

Chinese companies have become the force behind a surge in share sales in Hong Kong after a slow first quarter. JD.com Inc. and NetEase Inc. last month raised US$7 billion through second listings in the financial hub. In the first half of this year, the tech companies accounted for almost two-thirds of the city’s total fundraisings via first-time share sales, according to data compiled by Bloomberg.

Preparations for Wahaha’s offering are at an early stage and details including size and timing could change, the people added. A representative for Hangzhou Wahaha Group said they hadn’t received any relevant information regarding an IPO.