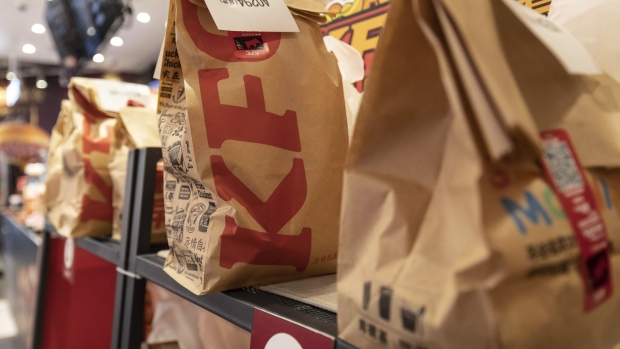 (Bloomberg) -- China is urging consumers to boycott a promotion offered by KFC and toy retailer Pop Mart International Group Ltd., saying it encourages food waste -- the latest example of a foreign brand running into trouble in the world’s second-largest economy.

The China Consumers Association said in a statement Wednesday that one person bought 106 meals, spending nearly 10,500 yuan ($1,650) to get an entire collection of toys. Others paid people to eat extra meals they purchased in the week since the promotion started or just threw the food away, it said.

“As a food retailer, KFC has induced and encouraged irrational buying of excessive meals,” said the association, a national organization overseen by the government. “This is in violation of morals and norms, as well as the spirit of the law.”

A poster of the promotion seen on the Twitter-like Weibo service shows the KFC-themed dolls are intended to mark the fast food giant’s 35th year in the Asian nation.

Representatives for Yum China Holdings Inc., operator of KFC, and Pop Mart didn’t immediately respond to requests for comment. Neither company’s shares were heavily impacted in Hong Kong, with Yum up 0.9% at the close and Pop Mart adding 7.2%.

The government of Chinese President Xi Jinping launched a sudden campaign in 2020 to cut down on food waste, a move that spurred speculation over its ability to feed its 1.4 billion citizens. Authorities later stressed the nation had ample food reserves.