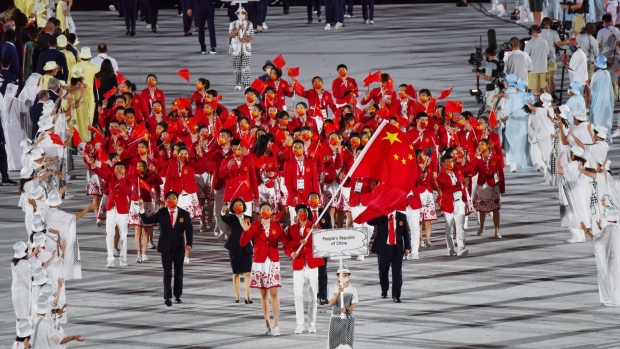 Flag bearers Ting Zhu and Shuai Zhao of Team China lead their delegation during the opening ceremony of the Tokyo 2020 Olympic Games at the National Stadium in Tokyo, Japan, on Friday, July 23, 2021. Covid-19's scar on the delayed Summer Olympics will be glaring, for the first time in history, events at Tokyo 2020 will be held without spectators and winners will place their own medals around their necks. , Bloomberg

(Bloomberg) -- China lashed out at Comcast Corp.’s NBCUniversal for displaying an “incomplete” map of the country during its broadcast of the Tokyo Olympics opening ceremony when Chinese athletes appeared, saying the games shouldn’t be politicized.

“The map is an expression of the national territory, symbolizing national sovereignty and territorial integrity,” a spokesperson for the Chinese consulate in New York said in a statement. “We urge the NBC to recognize the serious nature of this problem and take measures to correct the error.”

Multinationals operating in China have previously found themselves apologizing for the usage of maps that sometimes don’t include Taiwan, Tibet or disputed islands in the South China Sea.

“Attempts to use the Olympic Games to play political ‘tricks’ and self-promotion to achieve ulterior motives will never succeed,” according to the statement.

Ties between China and the U.S. have been strained over a series of issues including Hong Kong, human rights in Xinjiang and renewed probes into the origins of the Covid-19 pandemic. Beijing on Friday said it’s sanctioning seven people and entities, including former U.S. Commerce Secretary Wilbur Ross, in retaliation for a Biden administration warning to businesses about working in Hong Kong.