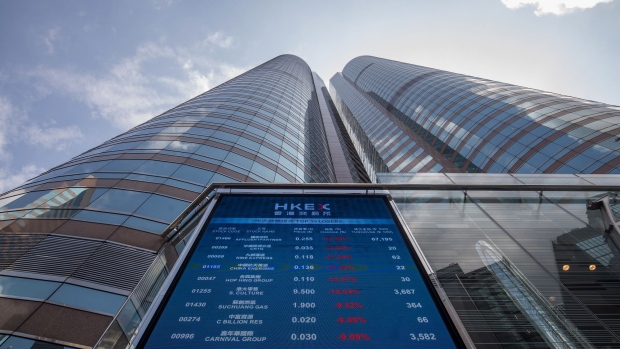 A screen displays stock figures outside the Exchange Square complex, which houses the Hong Kong Stock Exchange, in Hong Kong, China, on Monday, Sept. 16, 2019. The Hong Kong bourse's unsolicited takeover bid for the London Stock Exchange Group Plc was greeted with a scathing rejection and the exchange suffered a further humiliation when China praised the rebuff as well. , Bloomberg

(Bloomberg) -- China Bohai Bank Co., a mid-sized lender part-owned by Standard Chartered Plc, has picked lead banks for a planned Hong Kong initial public offering that could raise more than $2 billion, according to people familiar with the matter.

The Tianjin-based lender is working with ABC International Holdings Ltd., CCB International (Holdings) Ltd., CLSA Ltd. and Haitong International Securities Group on the share sale, said the people, asking not to be identified because the matter is private. The bank will probably list in the second half of next year, two of the people said.

Bohai Bank joins a flurry of Chinese lenders seeking to raise capital at a record pace as they grapple with rising bad loans amid the slowest economic expansion since the early 1990s. Policy makers have called on banks to help revive the nation’s growth and boost loans to China’s cash-starved non-state sector, which would see them take on more risks.

Bohai Bank, with 1 trillion yuan ($142 billion) of assets, saw its nonperforming loan ratio rise to 1.84% by the end of 2018 from 1.74% a year ago, with revenue declining 8.1%, according to its annual report. Standard Chartered held about 20% in the firm as its second-largest shareholder, while local government-backed TEDA Investment Holding owned 25%.

The planned offering comes as investor appetite is waning after a spate of declines in freshly listed firms on the mainland. Postal Savings Bank of China Ltd., one of the nation’s largest state-owned lenders, drew the lowest demand from retail investors in almost half a decade for its listing in China. Shares of China Zheshang Bank Co. fell below its IPO price shortly after its debut. Meanwhile, Hong Kong-listed Chinese banks have lost an average of more than 10% this year, with some smaller lenders losing over half of their value.

No final decisions have been made on Bohai Bank’s IPO, and details of the offering could change, the people said.

To contact the editors responsible for this story: Candice Zachariahs at czachariahs2@bloomberg.net, Jun Luo, Jonas Bergman