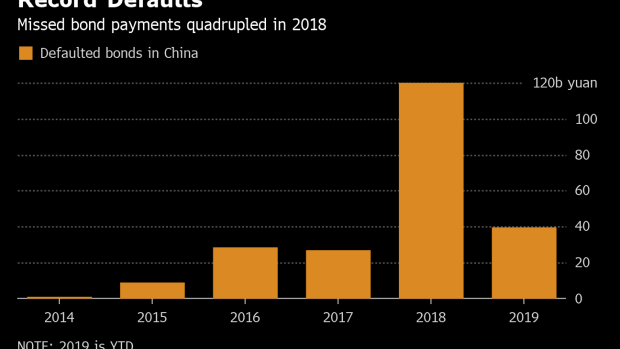 China’s domestic bond market is on course for a record year of defaults. What’s a little less clear is exactly how many defaults there might have been.

When a company in developed markets fails to make a bond payment on time as agreed, that information typically becomes public in swift order, and the issuer would normally be declared in default by ratings agencies and investors. But in China, sometimes things aren’t so obvious -- one of many idiosyncrasies for global funds to be aware of as they consider the increasingly open local-currency Chinese market.

An opaque practice that’s increasingly concerning analysts is when a debtor stops servicing bonds through an official clearing house, and instead does private deals with bondholders that might involve late payments.

The investment bank CICC has counted at least seven distressed borrowers that have engaged in the method since March. A separate filing from Henan Shengrun Holdings in mid April shows that it planned to repay part of the 650 million yuan ($94.6 million) notes due 2021 in private.

“The actual default rate in China may have been understated,” said Cindy Huang, an analyst at S&P Global Ratings in Hong Kong. S&P, which in January won a license to rate China’s onshore bonds, mainly relies on local financial data providers and the clearing houses to help monitor defaults. “Some such cases are recognized as default but some are not," she said.

In China, bond payments typically go through official venues including the China Securities Depository and Clearing Corporation Ltd. Cutting out such clearing houses could let an issuer undertake a restructuring without publicity that might affect its broader funding costs and the disposition of its other securities outstanding.

Investors seem to have largely gone along with issuers, accepting delayed payments off of the exchanges, in part out of concern at the low recovery amounts they’d likely face in the case of a publicly recognized default, according to CICC analysts including Ji Jiangfan in Beijing.

The bondholders, which tend to be financial institutions rather than the institutional investors found in a developed market, have little interest in seeing public default declarations, the CICC analysts wrote last month. For one thing, it could reflect badly on their credit decisions, they wrote.

Of the eight issuers, none offered a comment. Yihua,Chenzhou didn’t reply to emails. Sanpower declined to comment. Calls to HNA Aviation, Wintime, Jinzhou and Tianjin went unanswered. The CSDCC didn’t reply to a fax seeking comment.

Defaults and bankruptcy filings by bond issuers are still relatively new phenomena in China, and bondholders have yet to demonstrate the kind of behavior that might be expected of creditors in danger of unfair treatment in other markets.

“Bondholders would pin hopes on getting better deals than others, while issuers can also give priority to investors -- for instance -- who haven’t’ taken any legal actions against them,” said Yang Peiming, a Shanghai-based partner at Llinks, a Chinese law firm.

Another fairness issue is that any effectively secret defaults could leave the investors who hold other securities sold by the issuer at a disadvantage. Not knowing a technical default had occurred, they might not exercise their rights for an early call of the bond they hold, for example.

“Some investors are not able to demand immediate payment from the issuer, while some bondholders might get paid earlier,” said Huang at S&P.

As signs of stress mount, concerns are expected to grow. Chinese firms defaulted on 39.2 billion yuan ($5.8 billion) of domestic bonds in the first four months of the year, well over triple the total for the same period of 2018, according to data compiled by Bloomberg.

The bottom line, says Brian Lou, a portfolio manager at UBS Asset Management: “It has impaired transparency of the market and has increased market uncertainties.”

--With assistance from Molly Dai.

To contact the editors responsible for this story: Neha D'silva at ndsilva1@bloomberg.net, Christopher Anstey, Lianting Tu