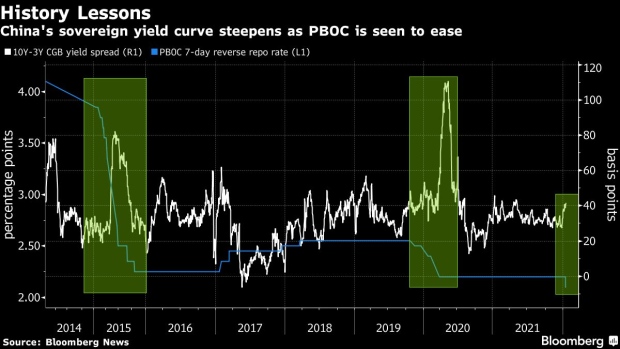 (Bloomberg) -- China’s sovereign yield curve is poised to bull steepen as the nation’s bonds extend an advance on expectations the central bank will continue cutting official rates while its global peers tighten policy.

Investors are positioning for the People’s Bank of China to lower rates further in the next few months after Monday’s decision to slice 10 basis points off its one-year policy loans -- the first reduction since April 2020 -- and to trim its seven-day reverse repurchase rate.

While the Federal Reserve is shifting its focus to heading off inflation, Chinese authorities are more concerned about propping up growth as they deal with the fallout from a crisis in the property market, weak private consumption and the risk of bigger coronavirus outbreaks. The PBOC is also expected to pump extra liquidity into the banking system before the Spring Festival holiday week starting Jan. 31.

“China’s rates market has yet to fully price in fundamental economic weakness, covid disruptions, and more importantly, the prospects for further rate cuts,” analysts at China International Capital Corp. including Jianheng Chen wrote in a note. They see see room for yields to slip and recommend investors add leverage and duration in the first quarter.

Citic Securities Co. chief economist Ming Ming expects the 10-year yield to slide to 2.6% in the medium term and the PBOC to “maintain an easing bias.” He hadn’t forecast this week’s shift and tips one or two more rate cuts, possibly in March and June.

Standard Chartered Plc, BNP Paribas SA, Nomura Holdings Inc. and and ING Groep NV are among the chorus of voices that forecast policy rates to fall further before the end of the second quarter.

Sovereign yields have continued to trend down since mid-December in the wake of PBOC’s pivot to more proactive easing. The drop accelerated this week, as the 10-year benchmark slid to around 2.75%, lowest since June 2020.

More action is also on the cards for Thursday, with China’s commercial banks seen likely to lower the loan prime rate for a second consecutive month following PBOC’s move on Monday.

Traders have already pushed the spread between 10- and three-year Chinese government bonds to more than 40 basis point, the widest since May last year.

“The short-end benefits from from PBOC rate cuts and will price more expectations of further easing,” said Albert Leung, an Asia emerging markets strategist at Nomura in Hong Kong. Leung said he is less positive on the 10-year yield, which may rebound in the second quarter if more signs of growth and credit bottoming emerge.

The seven-day repo rate, a gauge of interbank borrowing and leverage funding costs, typically moves with the PBOC’s own seven-day reverse repo rate and so is likely to drop by about 10 basis points, according to Everbright Securities Co. analyst Xu Zhang.

The PBOC has shown a willingness to funnel more liquidity into the banking system ahead of the Spring Festival, underscored by a case of back-to-back daily net injections this week. Fourteen-day reverse repurchase agreements are among the likely tools to be deployed to ensure there is enough cash on hand in the banking system to meet demand in the holiday week.

The drop has accelerated since December when PBOC cut the reserve ratio requirement for a second time to unleash cash. Swap points are now at the lowest since July 2020.

The spread between 10-year Chinese sovereign debt and the same maturity U.S. Treasuries has narrowed to about 90 basis points.

That’s the least since 2019 and comes as the Treasuries selloff gathers pace on increased speculation of a Federal Reserve rate hike in March. The yield premium in the three-year tenor also shrank to smallest in 13 months.

This slippage in China’s yield advantage over the U.S. may threaten to slow down foreign purchases of the nation’s bonds, taking some of the momentum out of the yuan’s rally.