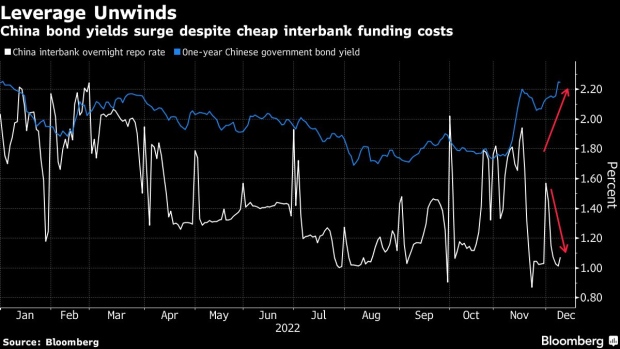 (Bloomberg) -- China’s bond investors are pulling back from a popular carry-trade strategy as the rapid easing of strict Covid measures boosts the country’s growth prospects.

The one-year China government bond yield rose to the highest since January this week while the overnight repo rate retreated toward 1%, close to its lowest since 2021. The divergence points to a likely unwind of leveraged bets, where traders profit from borrowing in the interbank market and purchasing government bonds.

While liquidity remains abundant for now, investors are gravitating toward shares for better returns with China’s outgoing Premier Li Keqiang predicting that economic growth will “keep picking up” following the recent easing of Covid controls. The move away from government bonds has been exacerbated by a wave of selling from retail investors that began last month.

China bonds “have entered a new stage,” Xu Gao, chief economist at Bank of China International wrote in a note. They’re ending a bull run built on excessive liquidity earlier this year but “it’s hard to tell at the moment whether surging bond yields will settle at any familiar levels,” he said.

A survey of more than 200 bond investors by Guotai Junan Securities showed that only 11% would add leverage before year end. Almost half chose to further reduce bond leverage in December.

Expectations that more measures to support growth would be announced at the Central Economic Work Conference next week and likely tighter year-end cash conditions will keep Chinese bonds volatile for at least this month, said Yang Yewei, an analyst at Guosheng Securities. The window for dip-buying could be early next year, if fourth-quarter economic data continue to show weak fundamentals, he said.

While the prospect of a surge in Covid cases following the eased restrictions poses uncertainties for the economy, the room for easing monetary policy further is seen as limited. China’s Politburo, the Communist Party’s top decision-making body, said this week that monetary policy measures should be  “targeted and forceful.”

Traders are also mindful of a fresh source of volatility stemming from retail investors following the recent slump in Chinese debt. Sovereign bond yields eased slightly after Chinese regulators were said to have asked the nation’s biggest insurers to buy bonds being offloaded by retail customers but the move was soon reversed.

Zhou Guannan, chief fixed-income analyst at Huachuang Securities Co. said she is counting on possible regulator intervention to help to contain redemption pressure and curb outflows from bond market. Regulators are more likely to step in if bond financing conditions for corporates are affected, she wrote in a note.