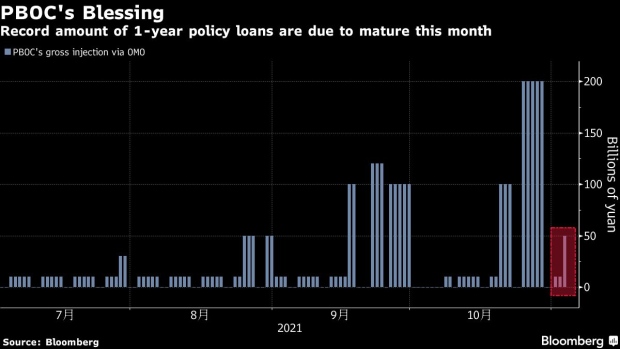 (Bloomberg) -- China unexpectedly boosted the injection of short-term cash into the banking system as record amount of policy loans come due and Premier Li Keqiang flags challenges to the nation’s growth.

The People’s Bank of China added 50 billion yuan ($7.8 billion) in the financial system with seven-day reverse repurchase agreements, after adding 10 billion yuan per day in the past two sessions. While the operation still led to a net liquidity drainage considering maturities, it signals that authorities have grown concerned about potential cash tightness in the coming weeks.

This month, lenders have to repay the PBOC a record 1 trillion yuan of medium-term loans injected last year following a series of defaults by state-owned companies. Banks also need to set aside cash to buy bonds sold by local governments.

The cash addition also comes as the economy faces headwinds amid Beijing’s efforts to slow growth in the real-estate sector. Premier Li said the economy faces new downward pressures and has to cut taxes and fees to address the problems faced by small and medium-sized companies.

“The move amid growth headwinds could help prevent funding costs from rising further and keep bond yields relatively low,” said Ming Ming, head of fixed-income research at Citic Securities Co. “But still, the market should not anticipate more radical easing from the PBOC like a reserve-ratio cut, considering that the Federal Reserve is tapering.”