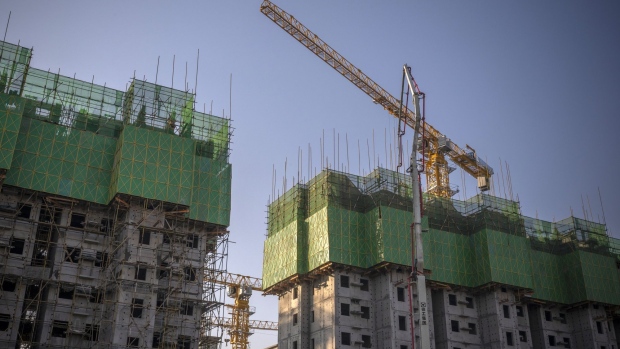 (Bloomberg) -- China will end one of its major equity fundraising bans on property developers to ease the real estate downturn, allowing listed builders to sell local shares for debt repayment and acquisitions.

Some multi-year restrictions on stock sales by developers will be lifted Monday to support the “stable and healthy” development of the sector, the China Securities Regulatory Commission said in a statement introducing five new measures.

China is stepping up support for the embattled property industry, which has seen a wave of defaults and plunging sales following a crackdown on borrowing from Beijing. Regulators issued a 16-point plan earlier this month to boost the real estate market, while several state-owned banks pledged at least 1.28 trillion yuan ($178 billion) in funding for developers.

“The support on equity fundraising is all round” as it covers mergers and stock sales, said Liu Shui, research director at China Index Holdings. “It’ll likely speed up consolidation in the property sector.”

With the latest measures Monday, the regulator allowed developers to sell stock to buy property assets, which had been restricted since 2015 when policy makers sought to prevent real estate firms from amassing cash to buy up land. Officials also opened the door for share listings following mergers, if the deal target is also a listed property firm.

Listed developers will be allowed to resume private placements in China to raise funds for a wide range of purposes, from completing housing projects and building affordable housing to replenishing working capital or repaying debt.

In a separate move, the Chinese state-backed company at the center of a key program to guarantee local bond sales from cash-strapped developers is loosening requirements to access funding, Bloomberg News reported earlier, citing people familiar with the matter.

China Bond Insurance Co. will now accept collateral from builders beyond their core assets, according to the people, who requested anonymity talking about private matters. It’s also lifting the acceptable loan-to-value ratio to above 50% in some cases, the people said. In addition, the firm will consider collateral from less developed regions, they said.

Construction companies, also under liquidity pressure given developers often owe them short-term debt, will enjoy the same easing, according to the Monday statement.

(Updates with analyst comment from fourth paragraph, more details throughout)