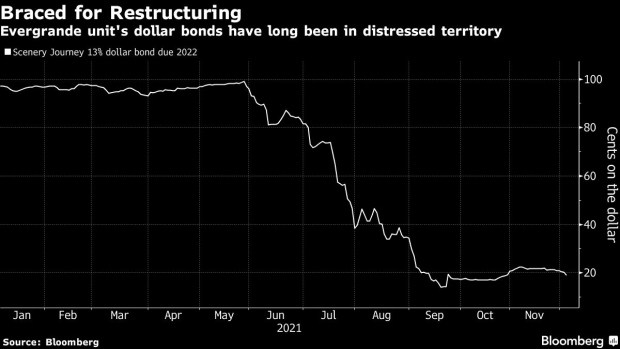 Unfinished apartment buildings at China Evergrande Group's Health Valley development on the outskirts of Nanjing, China, on Friday, Oct. 22, 2021. China Evergrande Group pulled back from the brink of default by paying a bond coupon before Saturday’s deadline, giving the property giant at least another week to come to grips with a debt crisis that has rattled investor confidence in the world’s second-largest economy. , Bloomberg

(Bloomberg) -- China Evergrande Group’s long-awaited debt restructuring may finally be at hand, posing a fresh test for Xi Jinping’s government as it tries to rein in the country’s financial excesses without derailing economic growth.

The embattled developer said in an exchange filing late Friday that it plans to “actively engage” with offshore creditors on a restructuring plan, offering its most explicit acknowledgment yet that its $300 billion of overseas and local liabilities have become unsustainable.

A barrage of statements from Chinese regulators -- several of which landed just minutes after Evergrande’s announcement -- suggested authorities are striving to contain the fallout on financial markets and homeowners rather than orchestrate a bailout.

The government of Guangdong, the southern province where Evergrande is based, summoned founder Hui Ka Yan to express concern over the company’s announcement and said it would dispatch a team to the developer to ensure “normal” operations. The People’s Bank of China blamed Evergrande’s problems on the company’s “own poor management” and “reckless expansion.”

The flurry of activity follows several weeks of relative calm for Evergrande, which has been making last-minute payments on its dollar notes since late October at the urging of Beijing. Friday’s statements signal the world’s most indebted developer may struggle to make further payments within their grace periods, even after a spate of personal asset sales by Hui that appeared designed to help Evergrande meet its near-term debt obligations.

The developer’s next test comes Monday. That’s when a 30-day grace period ends on two dollar bond interest payments that were initially due Nov. 6: a $41.9 million coupon for a note maturing in 2022 and $40.6 million of interest on a security due the following year. Both bonds were issued by unit Scenery Journey Ltd.

The question for global markets is whether Beijing can coordinate a restructuring without upending the broader real estate sector, which accounts for nearly a quarter of economic output. Policy makers have a history of abandoning efforts to rein in developers when the risks to growth mount, though Xi appears more determined than his predecessors to stamp out the moral hazard that allowed companies like Evergrande to expand so rapidly.

One risk is that Beijing may not have a full picture of how indebted Evergrande and its peers have become. The Shenzhen-based developer indicated in its exchange filing on Friday that it may not be able to fulfill its pledge to guarantee payment on a $260 million note issued by joint venture Jumbo Fortune Enterprises, an obligation that many Evergrande investors didn’t even know existed until a few months ago.

While it will be important to monitor how Evergrande’s restructuring progresses, the odds of renewed panic in Chinese credit markets are low, according to analysts at China International Capital Corp., one of the nation’s largest investment banks. Real estate companies with poor management and high financial risks will be “phased out,” but authorities are likely to ensure that higher-quality developers retain access to funding, CICC analysts Yan Xu and Eric Yu Zhang wrote in a report.

The fallout from Evergrande is likely to be “controlled within a relatively limited scope,” the analysts wrote.

Bond investors have been anticipating an Evergrande restructuring for months, with the company’s 2025 dollar notes trading below 30 cents since the end of September. An index of Chinese junk bonds slid for a third day on Friday, lifting the yields to 22%, though gains in investment-grade notes suggested bondholders have become more relaxed about the prospect of contagion than they were earlier this year.

Investors are increasingly differentiating between the weakest and strongest borrowers after China’s government took steps to mitigate the cash crunch for higher-rated developers in recent weeks. Apart from Evergrande, money managers are bracing for a potential default by Kaisa Group Holdings Ltd., which faces a $400 million bond maturity on Tuesday after failing to swap the notes for new ones due 18 months later.

For Evergrande, the next step may be to enter into an informal debt standstill as it continues to try to negotiate with creditors, according to Bloomberg Intelligence analyst Daniel Fan.

“Extension of maturities, based on sustainability of debt, would be likely,” he said. “One option to sweeten the process is to link some of the repayment to its offshore assets,” such as its Hong Kong-listed electric vehicle unit, Fan added.

Evergrande’s offshore creditors are widely expected to fall near the bottom of the priority list in a restructuring, behind nearly 1.6 million homeowners who gave the developer down payments on properties, local suppliers, Evergrande employees, and individual investors who bought wealth management and trust products tied to the company. Several Evergrande-linked WMPs and trusts have already defaulted, restructured or fallen behind on payments.