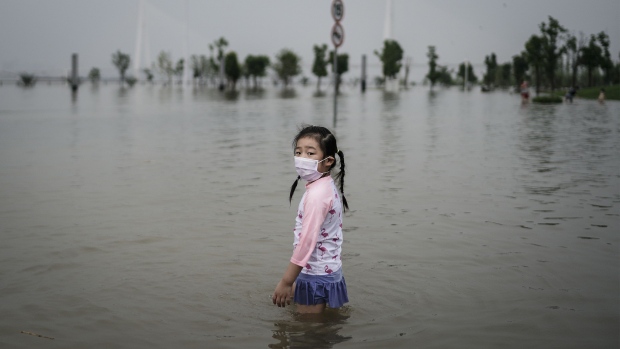 A girl plays in a flooded park in Wuhan on July 10. , Getty Images via Bloomberg

(Bloomberg) -- China is preparing for flooding in its northern regions that could potentially hurt crop output amid torrential rain that’s lasted over a month and caused billions of yuan in economic damage.

The floods have killed 141 people and affected more than 38 million residents in 27 provinces, Zheng Guoguang, vice minister of emergency management, told reporters in Beijing on Monday. The downpours caused more than 61 billion yuan ($8.7 billion) in direct economic losses as of July 9, the ministry said last week.

China suffers from floods every year, but more unpredictable weather has made the task of managing them more challenging, especially with this year’s rainfall among the worst on record. Since June, average precipitation in the Yangtze River has reached the highest level since 1961 and water in 433 rivers has risen above flood alert levels, according to official data.

“China is about to enter a critical period of flood prevention and control in late July and early August,” said Ye Jianchun, vice minister of water resources. “We expect rainfall to move northward and the Huai River and other rivers in the north are expected to experience large-scale floods in certain areas.”

Chinese President Xi Jinping on Sunday urged officials to implement more forceful and better measures to fight the floods, underscoring the severity of the situation.

Already reeling from the impact of the coronavirus pandemic, authorities are under pressure to ensure the floods don’t undermine China’s nascent economic recovery. An easing of lockdown measures plus a modest amount of policy stimulus should be enough to post a positive growth rate for the second quarter, after the historic 6.8% collapse in the first quarter.

From 2020 to 2022, China plans to push forward 150 major water works projects worth roughly 1.29 trillion yuan ($184 billion) combined, according to Ye. The projects are expected to bring 6.6 trillion yuan in direct and indirect investment and provide 800,000 jobs annually on average, he said.

In recent decades, the loss of life due to floods has declined in China due to water control projects and increased efforts in hydrological monitoring and forecasting, as well as a top-down disaster management system that has enabled authorities to respond more quickly.

From 1950 to 2018, floods killed more than 280,000 people and damaged 120 million houses and over 9.6 million hectares of crops. Early-season rice crops in some provinces in the south may miss their harvest due to this year’s heavy rains, China’s National Meteorological Center said in a report on Sunday.

Zheng, from the emergency management ministry, said China is now better equipped to deal with the heavy rains than in 1998, when the nation was devastated by record flooding. Weather forecasts haven’t indicated a repeat of that year’s disasters, which killed over 4,000 people.

China’s focus now is on patrolling the dams of the lower stream of Yangtze River and Tai Lake and monitoring hazardous areas. The government is also planning to evacuate people in flood-prone areas in advance.