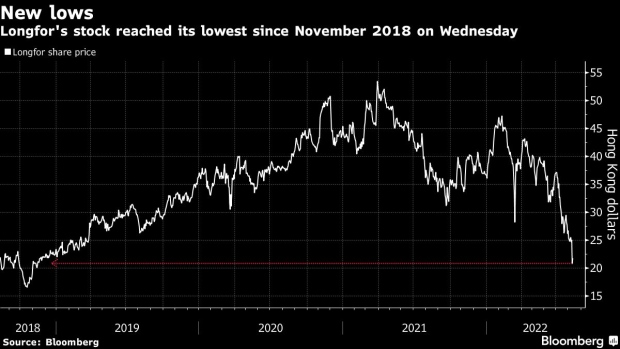 Buildings in Shenzhen across the border from Hong Kong, China, on Friday, June 24, 2022. From the stock exchange to brokerages, construction projects to the retail sector, Chinese state-controlled firms are increasingly dominating, taking market share away from the local tycoons and British trading houses that thrived under the final decades of UK rule. Photographer: Billy H.C. Kwok/Bloomberg , Bloomberg

The country’s 10th-largest builder by contracted sales plans to start paying off some debt due in 2023 like syndicated loans during the second half of this year, a company official said during a Wednesday investor call, said several people who dialed in to it.

A Longfor media representative didn’t immediately comment when reached by Bloomberg News. The company said in a stock-exchange filing that commercial paper due “has been settled without any deferred payment,” the firm is operating normally and is handling domestic and overseas debt in a timely fashion. Longfor added it’s been repurchasing bonds in the secondary market.

Shares climbed as much as 11% following Wednesday’s 16% tumble. Longfor’s dollar bonds rose as much as 2 cents on the dollar after steady declines this month, according to Bloomberg-compiled prices. Most of Longfor’s offshore notes remain in stressed territory at about 60 cents.

The company’s dollar bonds set record lows in recent weeks as stress involving Chinese developers moved from junk-rated companies to investment-grade peers such as Longfor. Pressure has persisted on the country’s builders as new-home sales continue to slump and many firms have been unable to refinance maturing bonds with fresh debt, helping prompt a record wave of defaults.

Concerns flared up after a Wednesday report from UBS Group AG, which cut its Longfor stock rating from buy amid cash-flow concerns. Market chatter about the company not repaying short-term IOUs, a financing tool known in China as commercial bills, spurred some comparisons to China Evergrande Group.

Longfor ceased issuing new commercial notes in 2021 and the roughly 700 million yuan ($104 million) still outstanding are expected to be repaid by the end of this year, Citigroup Inc. analysts said in a research note while highlighting the builder’s “financial discipline.”

During Wednesday’s investor call, Chairperson Wu Yajun said it’s a dim point for the industry but also time to look at opportunities rather than risks, according to several people who dialed in and asked to not be identified as they’re not authorized to speak publicly. The chairman of China’s second largest builder, China Vanke Co., said in late June “the market has bottomed out” but that a recovery would be slow.