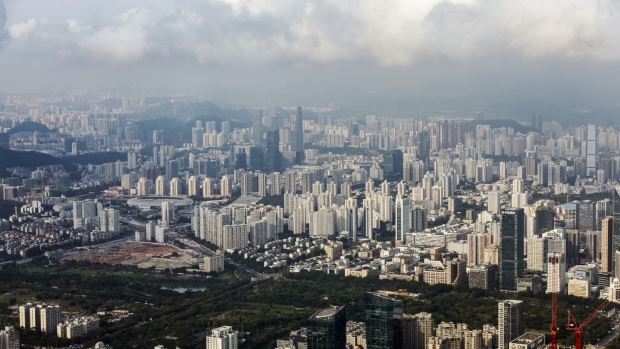 The Shenzhen skyline is seen from the observation deck of the Ping An Finance Centre in Shenzhen, China, on Thursday, Aug. 15, 2019. China plans to let Shenzhen City, which borders Hong Kong, play "a key role" in science and technology innovation in the Guangdong-Hong Kong-Macau Greater Bay Area, according to state media. Photographer: Qilai Shen/Bloomberg , Bloomberg

(Bloomberg) -- China can test the property tax in more regions including the technology hub of Shenzhen as well as Hainan and Zhejiang provinces, a renowned former state researcher said.

The country should expand the tax trial currently running in the cities of Shanghai and Chongqing and also proceed with legislation for a nationwide property tax, said Jia Kang, who was previously the director of the fiscal science research institute at the Ministry of Finance.

“The central authorities have placed great hope in these three areas, and they have both good conditions and an immediate need to join the pilot trial,” Jia said in an article published Tuesday in the Global Times. Jia’s currently the director of the China Academy of New Supply-side Economics.

A tax law may need a long time to pass parliament once it’s introduced, according to Jia, who estimated it could take more than a year to hold the normal three debates and it could even need a fourth hearing.

Read more: Why China Could Be Serious About a Property Tax Now: QuickTake

Jia said the government can optimize the policy with different rates for regions. A property tax won’t change the upward trend of home prices in megacities like Beijing and Shanghai, but will make prices rise slower with less fluctuation and speculation, Jia said. It will also help raise the proportion of direct taxes in fiscal income to improve income distribution, he said.