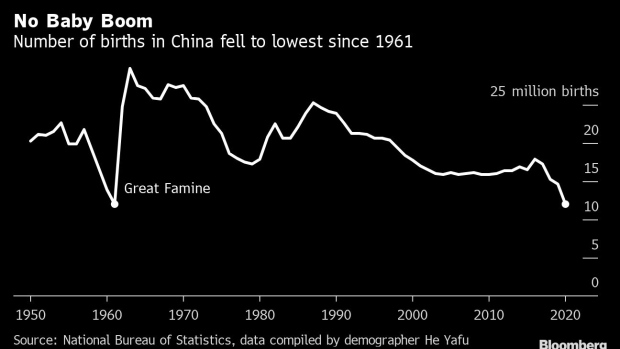 A person and children walk along a road in a shopping area in Chongqing, China, on Tuesday, June 1, 2021. China's surprise decision to allow all couples to have a third child may be too little too late to reverse the nation’s declining birthrate and shrinking workforce. Photographer: Qilai Shen/Bloomberg , Bloomberg

(Bloomberg) -- A recently-announced “three child” policy won’t prevent a long-term trend toward lower annual births in China, and the country will struggle to raise the retirement age by more than a couple of years by 2025, an influential Chinese economist said.

“I don’t think we can drastically raise the birthrate,” Yao Yang, dean of the National School of Development at Peking University, said in an interview. The government’s move to allow families to have three children could lead to a short-term increase in births, but “we cannot expect the effect to continue for a long time,” he said.

“We’d better prepare for an aging society,” said Yao, one of a group of economists who consulted with President Xi Jinping and top economic official Liu He last year. “That is the destiny of East Asian societies.”

Yao said that despite an aging population, rising productivity could sustain the economic growth rate close to its potential of 5.5% to 6% over the next decade. China should maintain high levels of investment in urbanization, education and research, he added.

“Other people say investment should not be a driver for China’s growth,” he said. “I don’t agree with that. China still needs capital.”

To slow the pace of a decline in its workforce, Beijing has announced plans to “gradually” raise the national retirement age -- currently one of the lowest in the world at 50-55 for women and 60 for men -- in the next few years but has not given a timetable. There is an added urgency to the reforms as China experienced a baby boom in the 1960s, and that cohort is already reaching retirement age, Yao said.

Retirement reforms could be slow though, Yao said, adding that he didn’t think the government will raise the retirement age too much because of “social resistance.” One “realistic” option would be to raise the age by an average of six months a year over the next five years, resulting in a 2.5 year increase by 2025, Yao said. By 2030, the retirement age for men and women could be five years higher than current levels.

Other highlights from Yao’s interview: