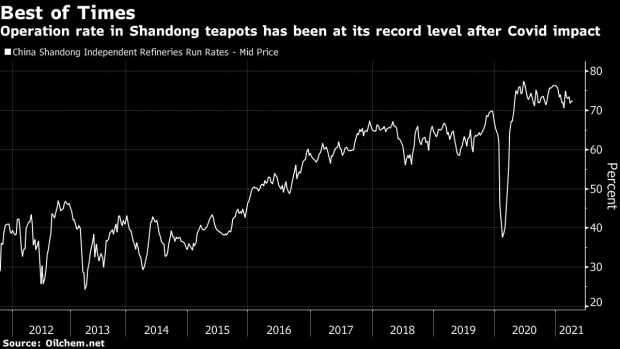 (Bloomberg) -- China is clamping down on independent oil refiners in an effort to curb overcapacity and stamp out illegal practices as the central government tries to control one of the country’s fastest-growing industries.

The National Development and Reform Commission, the top economic planner, begins inspections this week of more than 50 privately-owned oil refineries, most of them in the eastern province of Shandong, said people with knowledge of the checks.

A key reason for the probe is to determine whether processors have closed outdated, polluting equipment demanded by Beijing over the past decade, they said, asking not to be named as the matter is private. Inspectors will also visit plants that are allowed to buy foreign crude to investigate allegations of irregular activities such as tax evasion and illegal resale of the imports, the people said.

China is trying to curb overcapacity, a move that could potentially effect the growth of China’s crude imports. Private refiners have caused a seismic shift in the global oil market since Beijing gave them permission to import crude in 2015. While state-run PetroChina Co. and China Petroleum & Chemical Corp. -- better known as Sinopec -- still account for the majority of the nation’s refining, independent producers processed 3.16 million barrels a day in 2020, rivaling that of Japan or South Korea.

A March report by China Energy News, an industry journal run by the state-owned People’s Daily, estimated that excess refining capacity in China could grow to 150 million tons a year by 2025 unless authorities strengthen supervision and implement controls. The report was read by top Chinese leaders and partially triggered the inspections, the people said.

The paper said some refineries had been meeting targets to cut capacity by double counting or reporting reductions that had been idled earlier. The NDRC didn’t respond to a fax requesting details of the new probe.

Since they began to pop up in the early 1990s, the independent plants have shown a knack for survival. Known as ‘teapots’ because of the shape of early designs, they grew from small clay kilns that began processing oil from fields in Shandong that produced more than state refiners could take.

Beijing initially tried to shut them down in a bid to keep the industry in the hands of the state refiners, but local government support and the exploitation of tax loopholes allowed teapots to thrive. Processors in Shandong have been operating near record levels after a sharp rebound from the pandemic in April last year.

Shandong’s refineries have been promising to merge and upgrade since at least 2018 in the face of growing competition from state-backed rivals, new private mega-complexes in neighboring provinces, stricter tax rules and reduced access to funding. Key to the industry’s transformation is President Xi Jinping’s campaign to reduce refining as part of efforts to cut emissions.

Officials will check whether 17 small refineries in Shandong that were supposed to shut down last year actually halted output, the people familiar with the plans said.The inspections, reported by Chinese consultant JLC on April 12, will take from three to five days in each refinery and will be carried out by NDRC officials and industry experts, who will submit their conclusions to top economic officials of the central government, the people said.