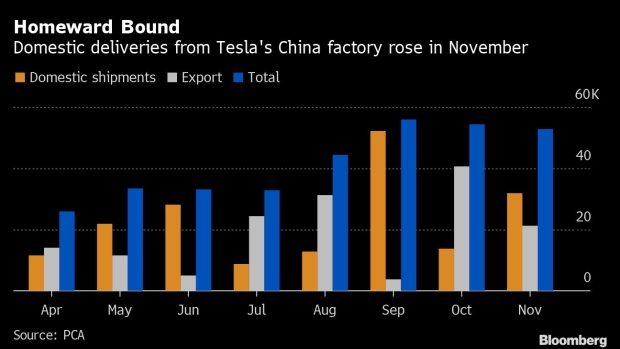 Deliveries of new-energy vehicles, which include EVs and plug-in hybrids, increased 121% from a year earlier to 378,000 units, China’s Passenger Car Association said Wednesday. That’s versus October’s 321,000 units, which was slightly weaker than September’s figures.

For the first 11 months of 2021, NEV retail sales in China reached 2.81 million units, putting automakers in the world’s second-biggest economy within reach of a predicted 3 million units this year. BYD Co., the Chinese carmaker backed by Warren Buffett, put in a particularly strong showing, with its total November sales about equal to that of Tesla Inc., Nio Inc., Li Auto Inc. and Xpeng Inc. combined.

“NEV sales have been super strong,” said Cui Dongshu, secretary general of PCA. “The penetration of EVs is no longer counting on government subsidies but rather on market demand.”

Telsa’s overall China deliveries meanwhile slipped 2.8% month-on-month to 52,859 units. Of those, 21,127 were exported while the remainder went into the domestic market.

That follows a typical trend with Tesla prioritizing overseas shipments in the first half of the quarter, before increasing local deliveries in the latter half of the period.

Cui also said that the “darkest period of the chip shortage is over” and that actual wholesale shipments of NEVs may even be more than 3.3 million units in 2021.

But he noted the upward pressure for EV battery makers as the price of battery ingredients like lithium, cobalt and nickel continues to climb and said the auto industry as a whole in China has lost around 92.3 billion yuan ($14.5 billion) in profits in the first nine months due to chip and other constraints.