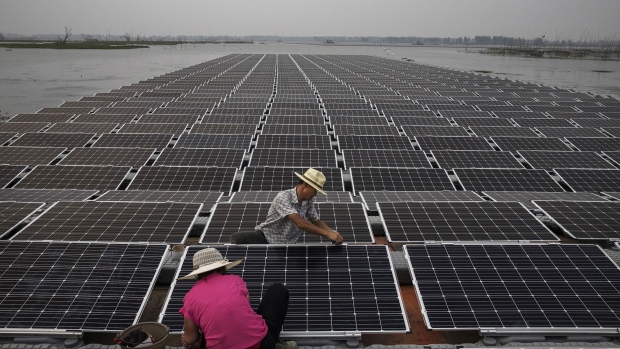 HUAINAN, CHINA - JUNE 12: Chinese workers prepare panels that will be part of a large floating solar farm project under construction by the Sungrow Power Supply Company on a lake caused by a collapsed and flooded coal mine on June 12, 2017 in Huainan, Anhui province, China. The floating solar field, billed as the largest in the world, is built on a part of the collapsed Panji No.1 coal mine that flooded over a decade ago due to over-mining, a common occurence in deep-well mining in China's coal heartland. When finished, the solar farm will be made up of more than 166,000 solar panels which convert sunlight to energy, and the site could potentially produce enough energy to power a city in Anhui province, regarded as one of the country's coal centers. Local officials say they are planning more projects like it, marking a significant shift in an area where long-term intensive coal mining has led to large areas of subsidence and environmental degradation. However, the energy transition has its challenges, primarily competitive pressure from the deeply-established coal industry that has at times led to delays in connecting solar projects to the state grid. Chinaâs government says it will spend over US $360 billion on clean energy projects by 2020 to help shift the country away from a dependence on fossil fuels, and earlier this year, Beijing canceled plans to build more than 100 coal-fired plants in a bid to ease overcapacity and limit carbon emissions. Already, China is the leading producer of solar energy, but it also remains the planetâs top emitter of greenhouse gases and accounts for about half of the worldâs total coal consumption. (Photo by Kevin Frayer/Getty Images) Photographer: Kevin Frayer/Getty Images AsiaPac , Photographer: Kevin Frayer/Getty Images AsiaPac

(Bloomberg) -- China’s top climate envoy urged developed countries to provide money and technology to developing nations to address climate change, as the countdown begins to the COP26 conference in Glasgow.

Xie Zhenhua, who will represent Beijing at the United Nations climate change conference, said he hoped countries such as Europe and the U.S. “will face up to their historical responsibilities” and “implement their commitments to provide adequate funding, technology and capacity-building support to developing countries.”

Beijing’s top climate envoy, who made the comments in an address to the annual Bund Summit in Shanghai on Saturday, also suggested that financial institutions have a role to play in low-carbon technology cooperation between China and other countries.

“We are willing to work with all parties, including the U.S. and Europe, to strengthen pragmatic cooperation in addressing climate change, especially in the field of green and low-carbon technologies,” he said.

China has pledged to peak its carbon emissions by 2030 and achieve carbon neutrality before 2060, though Xie said at the summit that Beijing will “strive to do better” than meeting the targets on schedule. As the world’s top polluter -- with research indicating that the country emits more greenhouse gases than the developed world combined -- pressure has been building on the government to do more to curb emissions.

President Xi Jinping said last month that China would stop building new coal-fired power plants in other countries but did not commit to curtailing its own reliance on the fossil fuel. A recent speech to oil workers by the Chinese president stressing the country’s need to secure its own energy supply signals a continued role for fossil fuels in the nation’s efforts to meet power demands.