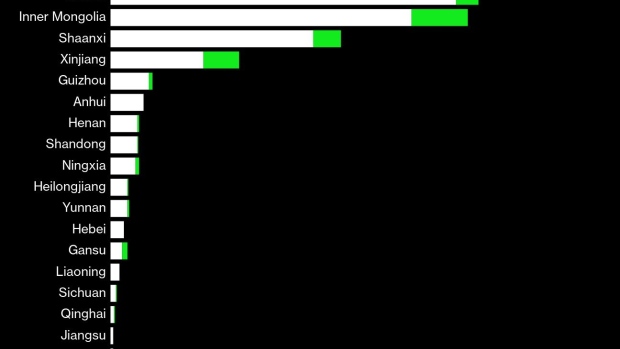 (Bloomberg) -- China’s plans for 169 new and expanded coal projects could boost global methane emissions from mines that produce the dirtiest fossil fuel by 10% and jeopardize its own short-term climate targets, according to a new analysis.

The projects under development would nearly double China’s original targeted increase in domestic output, according to a report from Global Energy Monitor released Tuesday. President Xi Jinping is deepening China’s dependence on coal as a way to mitigate the impact of soaring energy prices and geopolitical instability created by Russia’s invasion of Ukraine.

Beijing has said it’s shutting smaller, less efficient mines and replacing them with more efficient operations and that it will begin phasing down its coal production after 2025.

But China is expanding mines faster than it’s closing them and if that doesn't change it will be much harder for the country to meet climate goals like curbing methane emissions from coal operations and reaching peak carbon emissions by 2030, according to the GEM analysis. The estimated 559 million tons of annual new capacity in development could emit an additional 6 million tons of methane a year unless there is “relentless” adoption of mitigation practices, the non-profit said.

“Short-term decisions being made now are going to be very tricky to undo,” said Ryan Driskell Tate, a research analyst with GEM. “It runs a big risk of creating new sources of methane emissions.”

China’s National Energy Administration and Ministry of Ecology and Environment didn’t respond to requests for comment.

While there are ways to reduce methane emissions from coal mines that limit some of its planet-warming impact, ultimately the fuel has to be phased out to avoid the most catastrophic effects of climate change. To avoid that worst-case scenario, methane from coal mines must fall 11% every year for the rest of the decade, according to GEM.

The potent greenhouse gas has 84 times the warming power of CO2 during its first two decades in the atmosphere. An additional 6 million tons of methane released by China would have roughly the same short-term impact as the annual emissions from about 110 million U.S. cars.

Beijing has declined to join the international effort led by the U.S. and EU to curb methane but has said it’s working on a plan to contain emissions of the greenhouse gas.