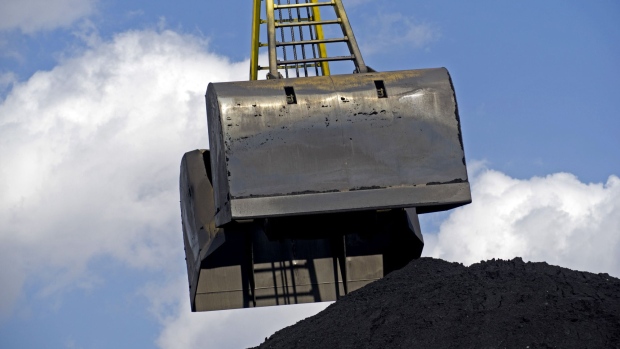 A clam shell crane bucket unloads the first shipment of anthracite coal from U.S. supplier XCoal Energy & Resources LLC, for state energy firm Centrenergo PJSC, onto the dockside at Yuzhny Port, near Odessa, Ukraine, on Wednesday, Sept. 13, 2017. A Pennsylvania company will send 700,000 tons of coal to Ukraine in a deal the administration of President Donald Trump heralded as an important tool to undercut the power Russia has over its European neighbors. Photographer: Vincent Mundy/Bloomberg , Bloomberg

(Bloomberg) -- Officials in the key Chinese coal mining hub of Ordos approved a massive mine that can produce 15 million tons annually and operate for nearly 97 years.

The city’s natural resources bureau on April 2 gave a license to Lianhai Coal Industry Co. to operate the Baijiahaizi mine, which covers about 170 square kilometers, contains 2.03 billion tons of coal reserves and has an estimated service life of 96.8 years, China Coal Resource reported.

The National Development and Reform Commission approved the project in 2019, and it started operation before obtaining local permits, according to the report. The license from Ordos now allows it to produce legally.

China’s top officials have told leaders in mining regions to expand production capacity by 300 million tons this year as the country leans on coal to secure energy supplies and insulate itself from soaring global energy prices.

Ordos, in western Inner Mongolia, is the biggest coal mining hub in China and produces more of the fuel than any other country in the world. Its output was 197 million tons in the first two months of the year, on pace to reach 1.18 billion tons for the year.